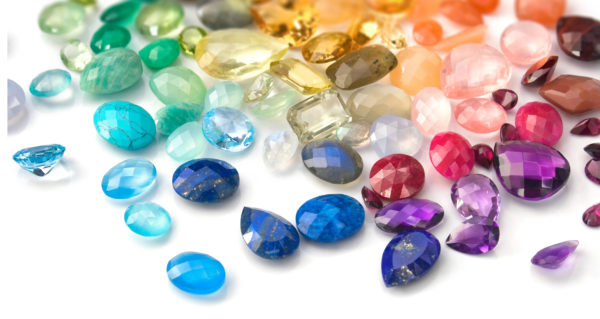 If you follow me on social media, you’ve seen my new series of horses I’ve been working on this year – Birthstone Horses. These are horses with coloring based on the birthstone associated with each month, and they also are bordered on two sides with sprigs of the monthly flower as well. I’ve been having so much fun working on this series so far. Actually, the original plan was to do one design a month throughout the entire year, but after I started working on the first one I was having so much fun that I just kept going.

As of the time I’m writing this, I have 4 Birthstone Horses designs complete and am halfway done the fifth one. I’d like to introduce you to the first four designs and tell you a bit about the eight designs that are coming up in the series as well.

The first stone of this series is the Garnet. Garnet has been a popular stone in jewelry for a long time and has even been found used as beads in a necklace from 3000 B.C. The name of this dark red stone comes from the Latin word “Garanatus”, meaning “seed-like.” The gem likely got this name because small ones look like the small seeds that would be found inside of Pomegranate. Bohemia, which is now a part of Czechoslovakia, was a prolific source of Garnet. Many Bohemian castles and churches were decorated in Garnet. The stone was also popular in Victorian jewelry. It is said that Garnet is a powerful stone for curing many ailments, especially blood ailments, because of its deep red color. 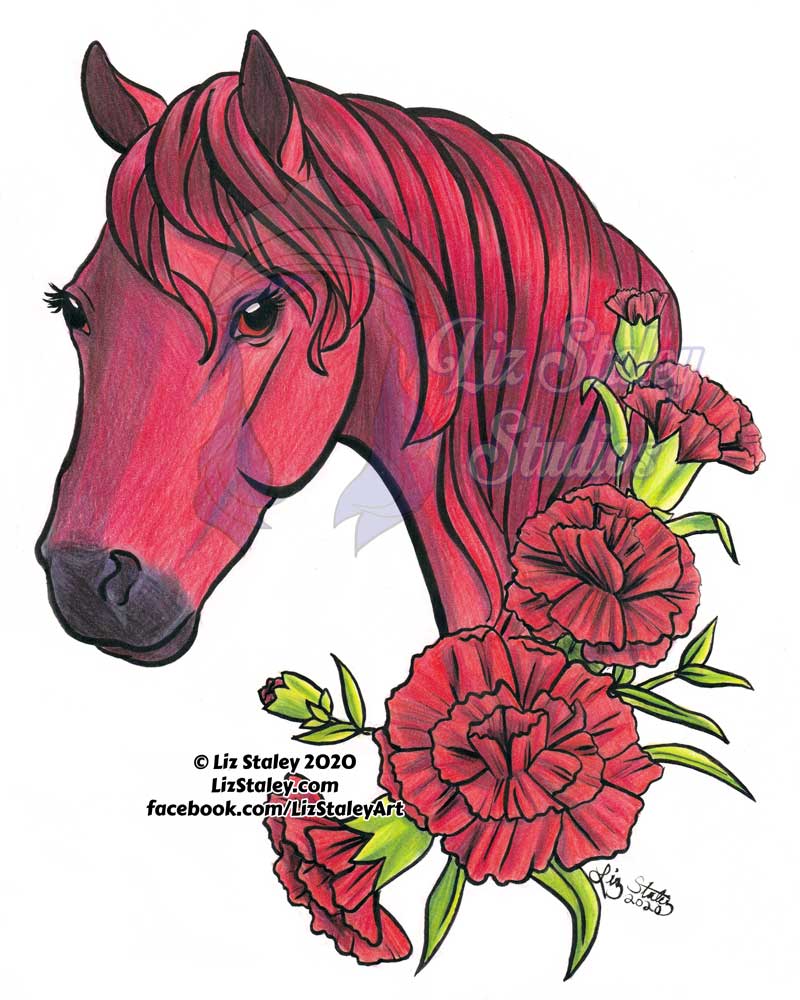 The January flower is the Carnation, which I chose to also color in the same reds as the horse of this January design. The Carnation has a history which dates back at least 2000 years. The January flower represents gratitude, beauty, pride, divine love, and feminine energy. Carnations have a dense, hardy core surrounded by feathery soft and delicate petals.

Amethyst once was a stone that could only be worn by royalty. Amethyst is included in royal collections all over the world, from Ancient Egypt to modern Britain. It was once more prized than ruby and sapphire. The name Amethyst comes from the ancient Greek word “amethustos”, meaning sober. It was believed that wearing one of these beautiful purple stones would prevent the wearer from becoming intoxicated. The stone has also been associated with controlling evil thoughts, increasing intelligence, and even keeping warriors safe on the battlefield! 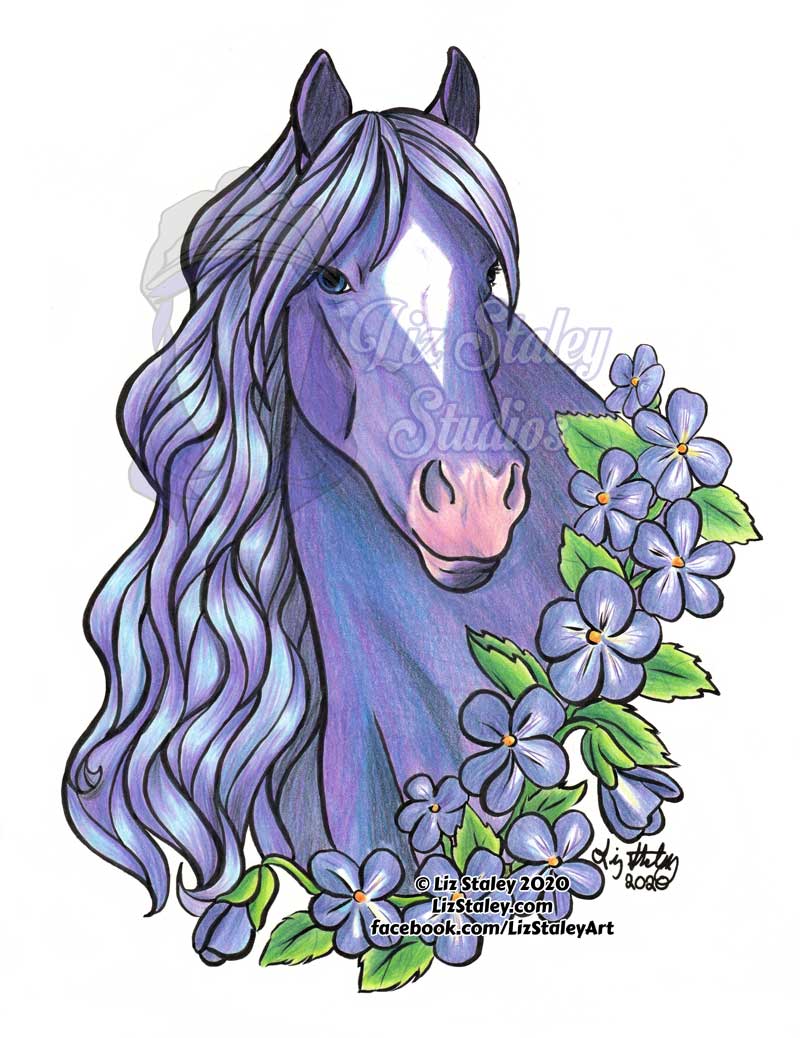 The flower that is associated with February is the Violet. Violets were cultivated around 500 B.C. by the Greeks. Today, there are over 500 species of violet, including those known as “pansies”. Violets symbolize modesty, spiritual wisdom, faithfulness, and humility.

The third design in this series is the first one where the stone and the flower weren’t the same color, so I was nervous to get going on this one. However, once I started coloring I realized that this combination of light blue and brilliant yellow was just gorgeous!

In the 19th century, the more green varieties of Aquamarine were the most popular. But now the more blue stones are the most desired. The largest Aquamarine stone ever found was discovered in Brazil in 1910, and weighed 243 pounds. Greeks and Romans knew the stone as the Sailor’s Gem, and it would ensure safe passage across stormy seas. In 1377, the stone was widely regarded as a cure for poison, and it was said that even wearing the gem as a pendant or ring would work. It was said that Aquamarine could cure many ailments, including stomach upset. 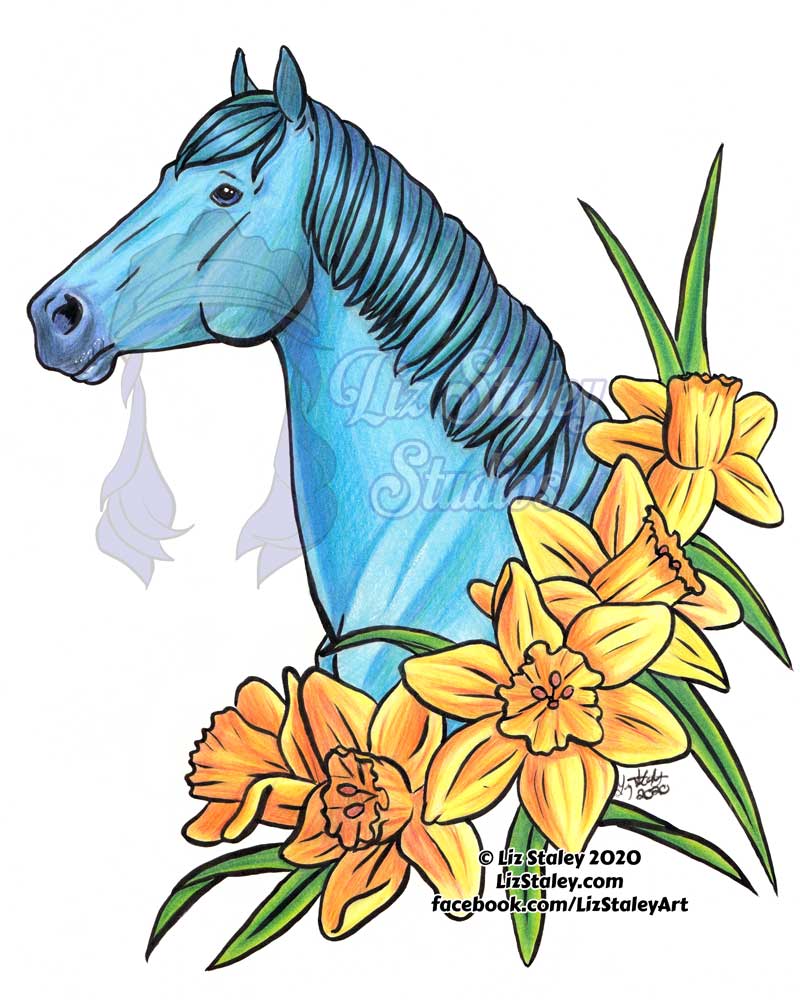 The Aquamarine horse is bordered by March’s flower, the Daffodil. Daffodils are associated with new beginnings and the coming of spring, since they are one of the first flowers to bloom after winter’s frost. They are grown all over the world and have been the subject of poems and songs. In China, the Daffodil symbolizes good luck, prosperity, and good fortune.

Diamond gets its name from the Greek word “adamas”, meaning “invincible”. Diamonds come in a wide range of colors, including black, blue, red, pink, purple, and yellow. The color of a diamond is influenced by the impurities present in the stone. Diamonds are one of the hardest substances on earth, and wearing one is thought to give the wearer better relationships, inner strength, balance, clarity, and abundance. Some ancient peoples believed that diamonds were created by lightning, or that they were the tears of god. During the Middle Ages, diamonds were thought to have many healing powers, and to cure ailments of the brain and pituitary glands. It was believed that heating a diamond and taking it to bed with you would draw toxins from the body. Diamonds are the king of birthstones, and are the most widely sought after gems. 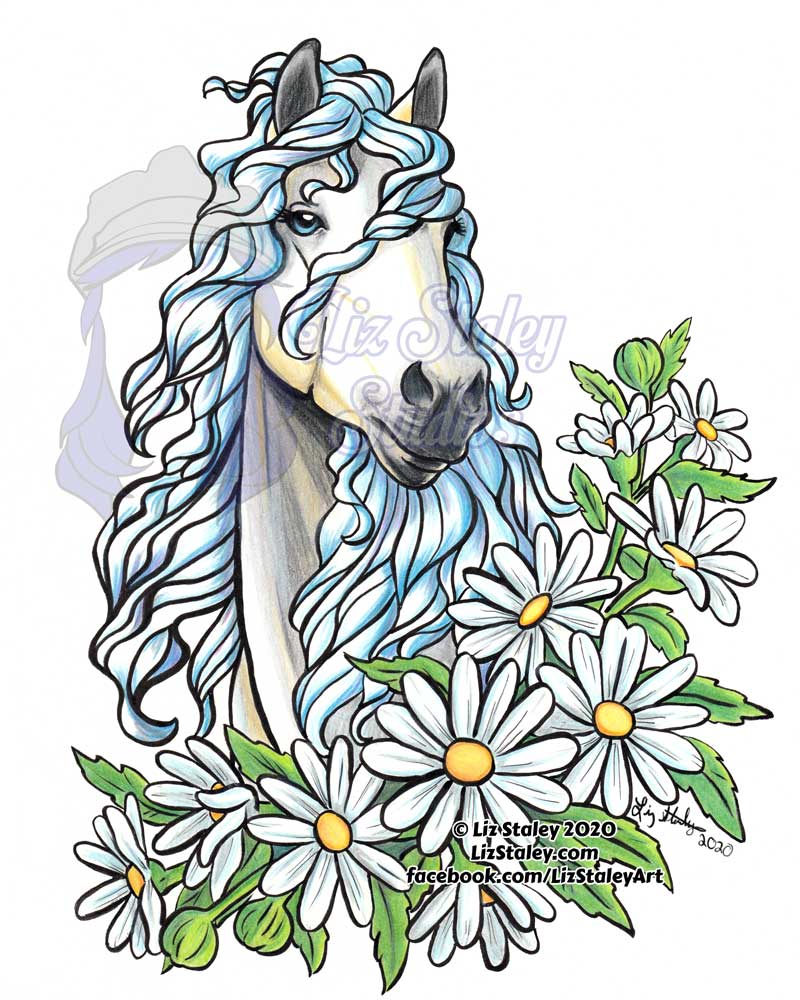 The Daisy is the flower of April. Daisy captures the essence of Spring’s happy-go-lucky energy. Daisies also symbolize purity and innocence. In Norse Mythology, the Daisy is Freya’s flower. Because of this, Daisies were often given to new mothers. The Daisy is a composite flower, meaning that they are actually two flowers in one. The inner section is a disc floret, and the outer section is a ray floret. Because of this, Daisy also symbolizes eternal love. The phrase “fresh as a Daisy” comes from the petals of the Daisy closing over the center during the night and then opening again in the morning.

I will be continuing to do more Birthstone horses until I have all twelve months complete. Here is the list of stones and flowers I’m planning, broken down by month.

May – Emerald and Lily of the Valley

If there is interest, I definitely want to create a set of notecards and possibly a 2021 calendar with these designs once they’re finished! T-shirts of the first four designs are available and prints will be listed for purchase from my online shops soon as well. They would’ve been up already but I ran out of the plastic bags I put matted prints in to protect them and I’m waiting for my new shipment to arrive.