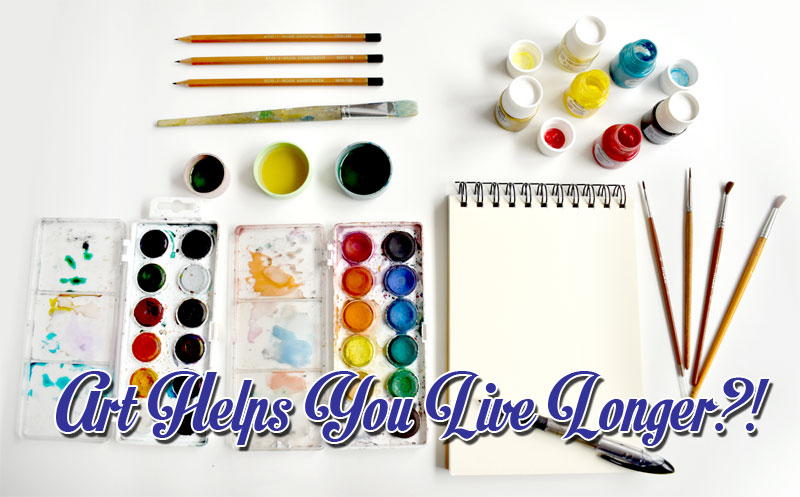 I was browsing for art news last week and stumbled across an interesting article on a site called Newser, which is apparently a site that curates news from various sources and writes easily-digestible “news briefs” about the story on their own site. Anyway, according to this article, a study was conducted to discover if exposure to the arts has any effect on lifespan.

According to the study, which was published in the BMJ, over 6700 subjects over the age of 50 when the study started were then tracked over the next 14 years. The study tracked how often the participants in the study were exposed to the arts, and how many had passed away by the end of the study.

After controlling for other factors, the researchers found that the subjects who engaged in the arts “frequently” (at least once every few months) had a 31% lower risk of dying compared to those who never engaged in the arts. Even those who only went to an art-themed event only once or twice a year had a 14% less risk than non-engagers.

Theories on this correlation include arts lovers being more engaged with the world at large, less sedentary, more empathetic, and less lonely, which are all factors in living longer.

As amazingly cool as this study is, I think it’s pretty much a “No Duh!” moment for me. Despite the fact that the arts are usually the first thing cut at schools, there’s no doubt that they are extremely important. But it is nice to have a study to point to that can quantify, at least somewhat, just how important the arts are.

Creating a new piece of art, writing a story, listening to a beautiful piece of music, seeing a good movie, going to a concert, looking at something inspiring created by a fellow artist, or reading something that captures the imagination are all things I can personally count on to help with my depression and anxiety. Sometimes, when I’m feeling depressed, the best thing I can do is get out my pencils and put on some music that I love, and just get it all out in my work while I sing along at the top of my lungs. (Be glad you aren’t my neighbor, because I am not a great singer. Sorry to all my current neighbors who may have to deal with hearing me singing along to whatever music fits my fancy at the moment.)

Being an artist and being involved in art has also done wonders for my social anxiety. Joining an artist cooperative has given me a pool of other artists to gain wisdom from, and I can also teach them the things that I know. It’s lovely to know that I have a group of people with similar interests and who all have similar goals. Art means that I always have something in common to talk to my fellow co-op members with. Also, when I do a convention or a craft fair, I don’t have to be afraid to be out in the crowd, because anyone who shows an interest in my wares probably has similar interests to me, so I can talk to them about something.

So, in my personal experiences, art of all kinds helps with my depression and anxiety, makes me more social, improves creative thinking and keeps me learning, and gets me out of the house when I maybe wouldn’t necessarily want to go be in a crowd of people.

I guess this study just proves I’m going to live forever! What positive impact has art had on your life?