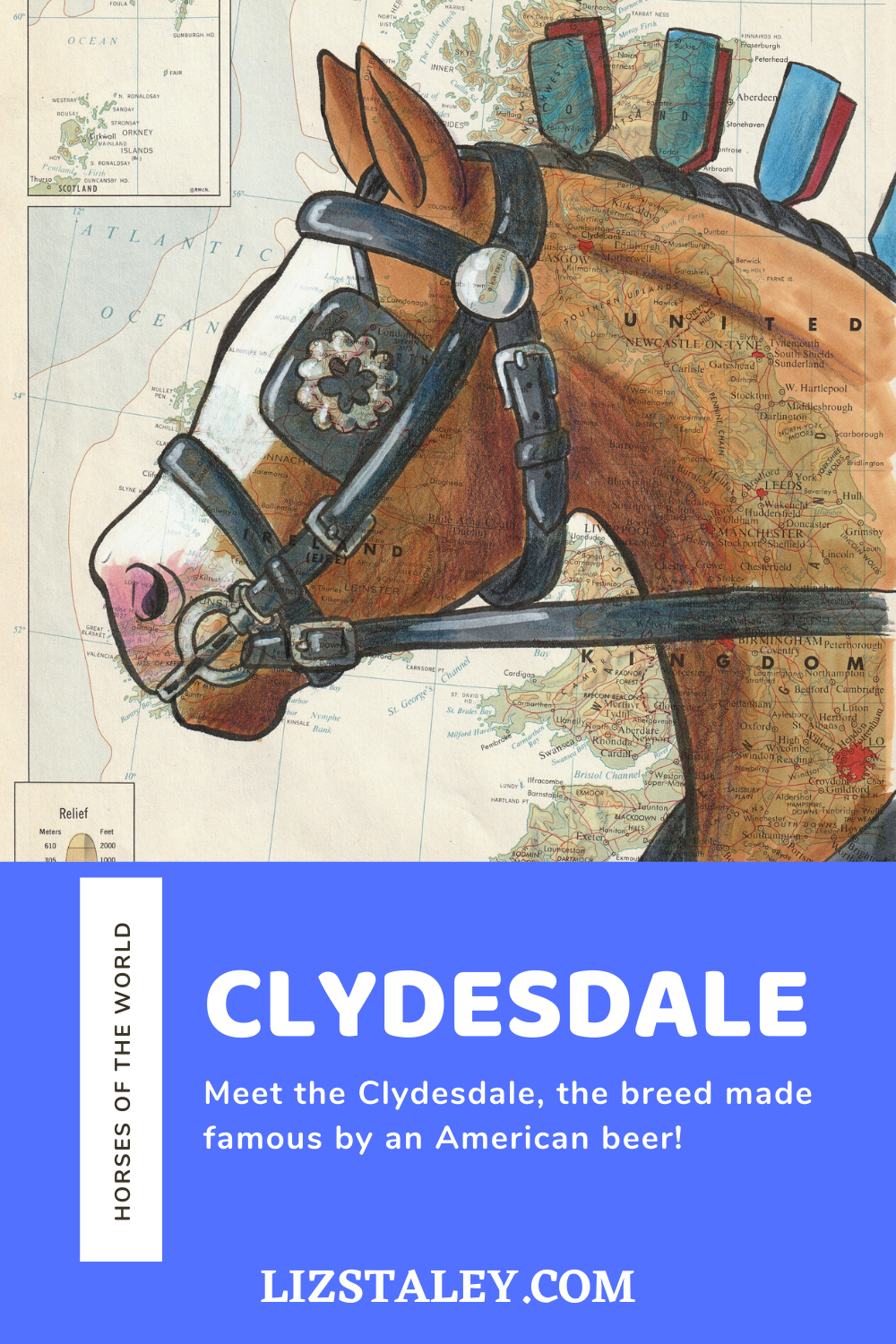 Clydesdale horses typically are between 16 hands (64 inches) and 18 hands (72 inches) at the shoulder, and can range anywhere from 1,600 to 2,400 pounds. Despite their imposing size, they generally have a calm temperament and are very gentle, earning them the nickname of “Gentle Giants”.

I absolutely love Clydesdales. They are one of my favorite breeds, probably from seeing Budweiser commercials and also going to Busch Gardens on a yearly basis as a child. In fact, I have a photo of me from roughly 9-10 years old, at Busch Gardens, with a Clydesdale that I was undoubtedly delighted to be so close to. I’ve just had a life-long fascination with these big draft horses! So adding them to the Horses of the World series of art was a no-brainer for me. Normally I don’t like drawing tack, but it felt like not including a harness and putting the Clydesdale in all its finery would do a disservice to this breed that is so famous for being a carriage horse.

Like the other horses in this series, the black outlines were done with India Ink in a Pentel Pocket Brush Pen (a brush pen with bristles like a real brush, but with the convenience of a pen! Plus it’s refillable, so it’s a little more eco-friendly than buying a new pen every time I run out of ink. You can buy one from this affiliate link if you’re looking for an amazing pen for art or hand lettering!). Coloring was then added with Copic markers and colored pencils. The white face marking on the horse was done with slightly watered-down white acrylic paint. I water the paint down slightly so that the map still shows through a little.

Keep reading after the photo for some more facts and history about the Clydesdale breed!

The River Clyde flows through what was once the Lanarkshire district of Scotland. This river is where the Clydesdale gets its name from. The breed was developed during the late 18th and early 19th century. The Clydesdale breed was first introduced to North America when Scottish settlers brought them to Canada, then they were introduced to the United States in the 1880’s. Clydesdales were used to plow fields, power machinery, pull wagons, and any other task that required a horse with great strength and high endurance.

Clydesdales nearly went extinct when powered machinery began replacing heavy horses in both agriculture and industry. The horses were also taken for use in World War I, which contributed to their declining numbers. To this day, they are still considered an “at-risk” breed, despite being highly recognizable and popular thanks to their fame as the breed that is used to pull the Budweiser wagons. The Clydesdale has been used as a symbol for the brand since the end of Prohibition in the United States. The breeding program for the Budweiser Clydesdales, with its highly strict color and conformation standards, have influenced the look of the breed so heavily that most people believe all Clydesdales are bay with white markings. Clydesdales are usually bay, but can be black, grey, chestnut, or have a roaning pattern.

The Clydesdale Horse Society was formed in 1877 as a breed registry. Breeders and enthusiasts work to ensure the survival of the Clydesdale. The United States has the largest number of Clydesdales currently, with around 600 new horses being registered each year.

Do you love the Clydesdale breed? Use the sharing buttons below this blog post to share this article with your friends!