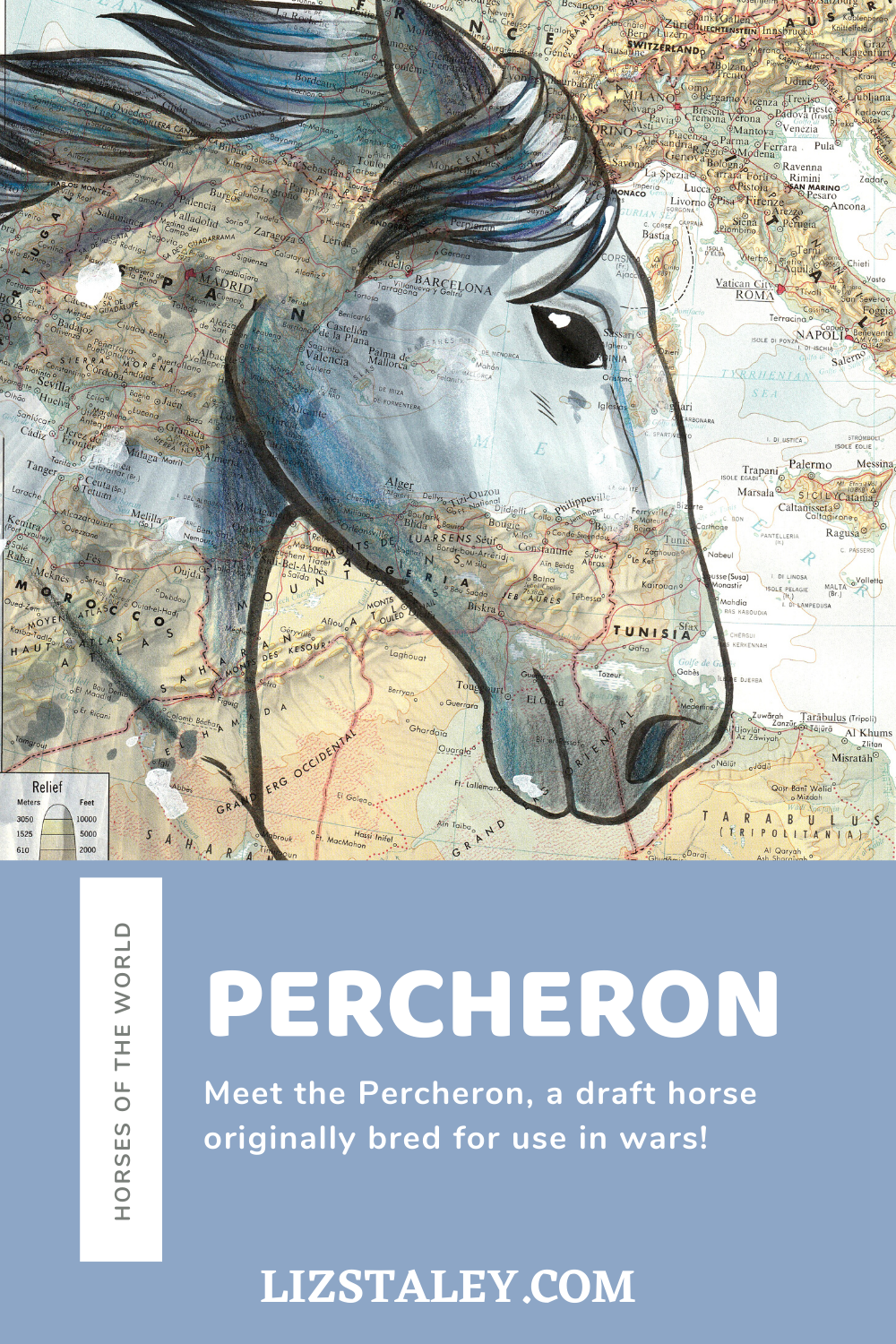 The true origins of the stock that produced the Percheron are unknown, but ancestors of the breed were present in the Huisne River Valley in western France by the 17th century. These well-muscled, intelligent, and hard-working horses are usually gray or black in color. They were originally bred for use in war, but over time they began to be used for pulling stagecoaches, and later to pull farm equipment and to haul heavy goods. Arabian blood was added to the breed in the late 18th and early 19th centuries, a common practice across many breeds to improve their traits.

Before World War I, thousands of Percherons were shipped from France to the United States. An embargo stopped shipping after the war began because the breed was being used extensively in the war effort. By the 1930’s the Percheron accounted for 70 percent of the draft horse population in the United States. However, like the Clydesdale horse, their numbers began to dwindle after World War II because of booming technology. The breed is still used extensively for draft work, forestry work, pulling carriages, and work under saddle such as show jumping and other English riding disciplines. In France they are also used for food.

The ideal size of the Percheron varies by country. In France, height ranges from 15.1 to 18.1 hands (61 to 73 inches) and weight ranges from 1,100 to 2,600 pounds. In the United States the breed ideal is between 16.2 to 17.3 hands, with a weight of 1,900 to 2,600 pounds. Though they are generally gray or black in color, the United States registry allows the registration of roan, bay, and chestnut horses. In France and Britain, only gray and black horses may be registered Percherons. Excessive white markings are considered undesirable for the breed.

Today, the Percheron is the most famous and populous of all French draft breeds. Percheron stock was used to improve the Ardennes and Vladimir Heavy Draft Horses, and to create the Spanish-Norman breed.

The largest team of working Percherons in Europe can be found at Disneyland Paris, where the breed makes up 30 percent of horses in the park.

To say that I love the Percheron breed is an understatement. The horse I learned to ride on was a Percheron crossbreed and I adored her patient and chilled out personality. I wrote an entire blog post about her, in fact! The Percheron was one of the first breeds I added to the Horses of the World after drawing the initial six breeds. I modeled the horse in the drawing after a Percheron that was boarded at my first barn job, a big gray horse who was just the coolest horse. Like the other early horses in the series, this piece was done with black india ink, Copic markers, and colored pencil. White areas were added with acrylic paint that was slightly watered down to allow the map to be seen through it.