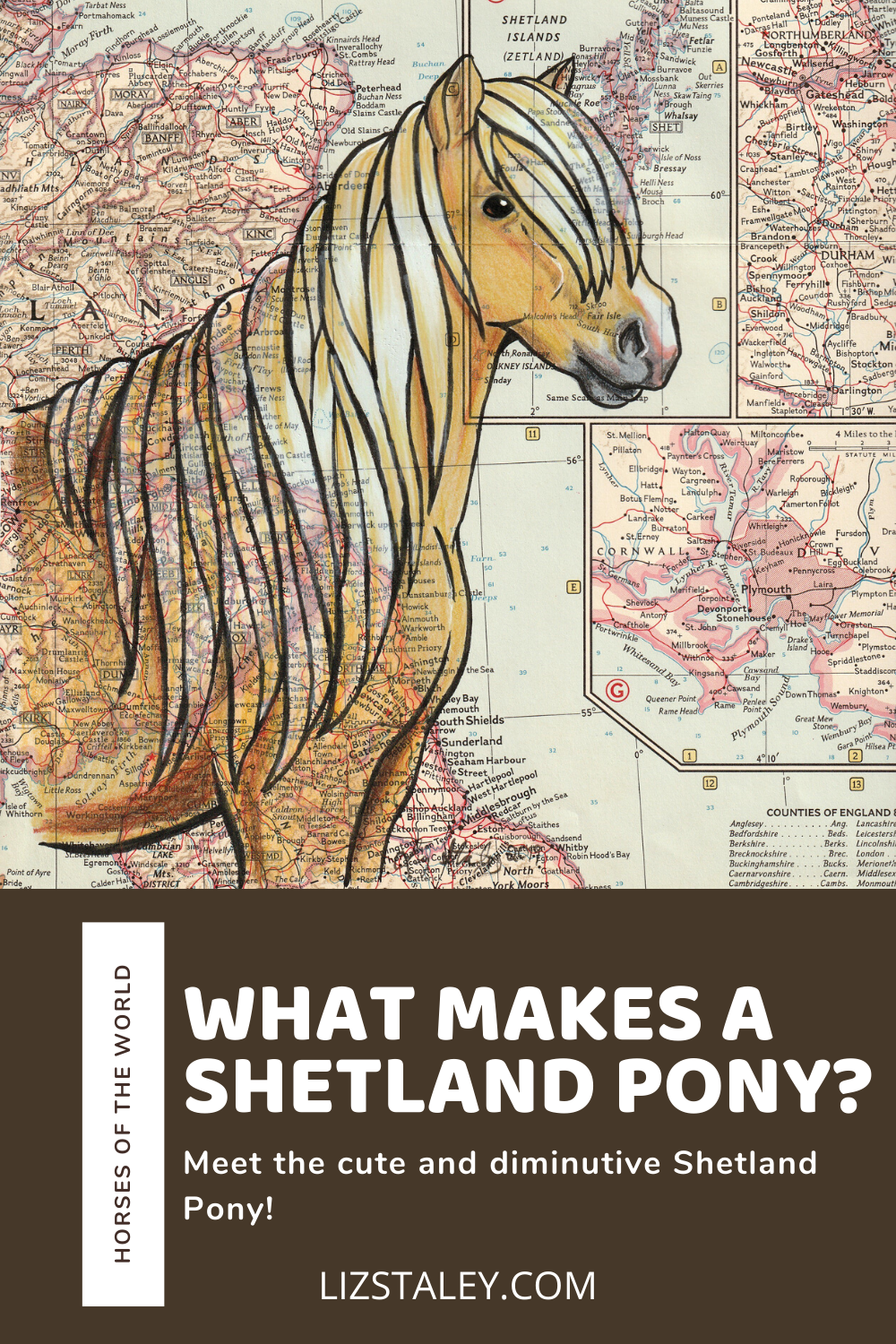 Northeast of mainland Scotland lay the Shetland Isles, where small horses have been kept since the Bronze Age. People who lived on the islands likely crossed the native stock with imported ponies from the Norse settlers and also with Celtic ponies. The harsh climate and food scarcity made the Shetland ponies develop into an extremely hardy breed. Shetlands have small heads, widely spaced eyes, and small and alert ears. A short, broad back and deep girth are universal characteristics of the breed. They are hairy little ponies, with long thick manes and tails and a dense double winter coat. They can be nearly any color, though only crossbreeds can be leopard-spotted or champagne.

Shetland ponies are usually gentle, good-tempered, and highly intelligent. They make very good ponies for children and are sometimes noted for their bravery. Because of their intelligence and size, they are easily spoiled and headstrong unless properly trained. The Shetland is the strongest of all horse and pony breeds in relation to its size, able to pull twice its own weight in comparison to a draft horse that can pull around half its own weight. It is not unusual for a Shetland Pony to live thirty years or more. However, their small size can also predispose some to heart problems.

Shetland ponies were first used for pulling carts, carrying peat and other items, and plowing farm land. As the Industrial Revolution increased the need for coal in the mid-19th century, thousands of Shetland Ponies were sent to mainland Britain to work underground carrying coal for what would likely be their entire – often short – lives. Some coal mines in the Eastern United States also imported Shetland Ponies for work. The last of these pony mines in the U.S. closed in 1971.

Today, the Shetland Pony is ridden by children and are shown by both children and adults at horse shows and in harness driving classes. They can also be found giving pony rides in commercial settings such as fairs and carnivals. Some petting zoos and therapeutic riding programs also use Shetlands in their programs. Miniature Shetlands, as well as other miniature breeds, can also be trained as guide horses.

I had gotten several requests for the Shetland Pony at events and from my on-line fans as well, and I was delighted to find this map that actually has an inset of the Shetland Isles on it! It seemed like fate and I knew that I had to draw the adorable little Shetland on this map. One of my favorite things about drawing horses is manes – I just love long, flowing manes and tails – so drawing a cute hairy little Palomino pony with a long mane was so enjoyable. I think this guy is so cute and I love how this illustration turned out!

Do you or someone you know love the Shetland Pony? Use the buttons below to share this post with them!