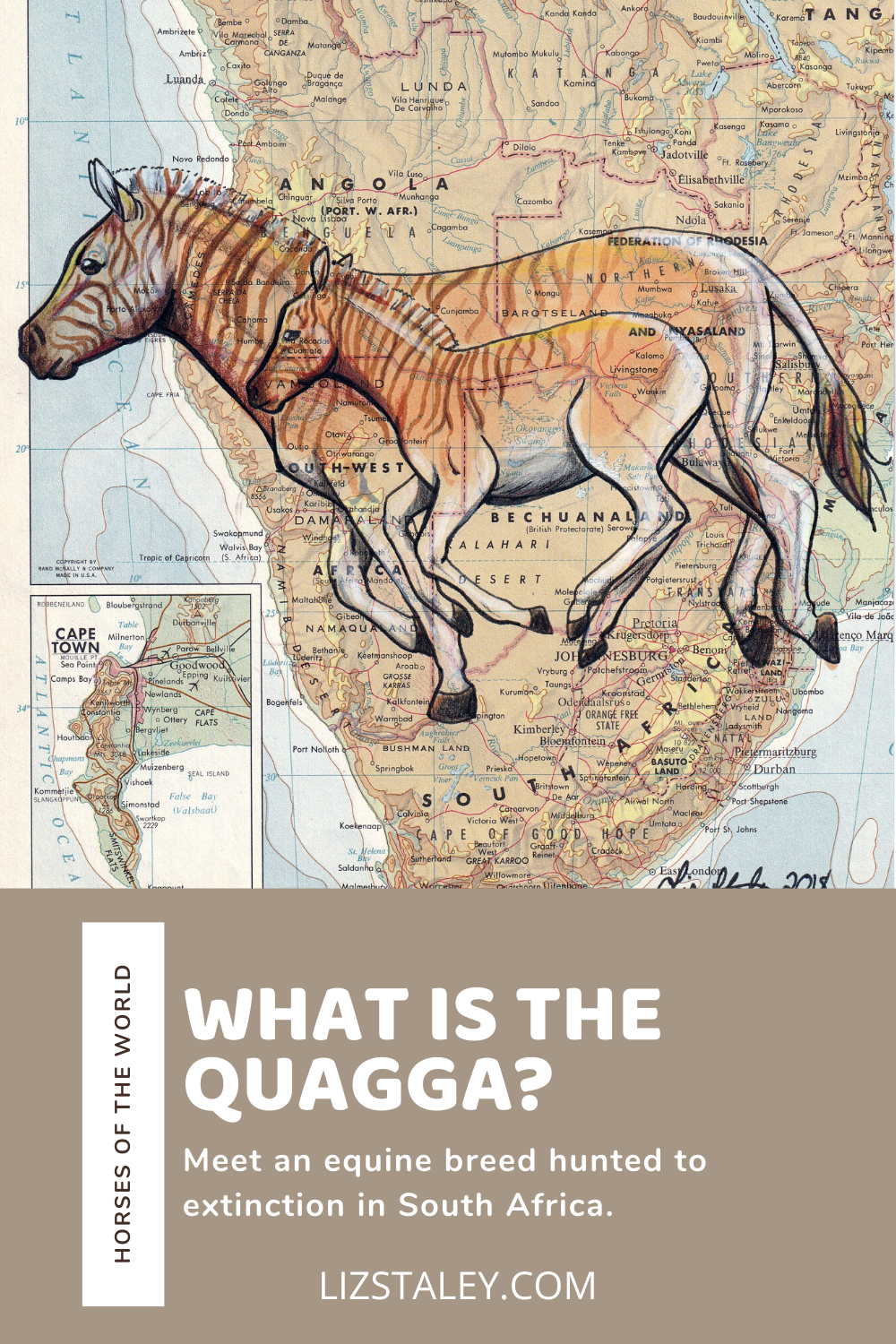 The Quagga was long thought to be a distinct species, but early genetic studies have supported to being a subspecies of the plains zebra. A more recent study suggested that it was merely the southernmost ecotype of the species. The name was derived from the animal’s call, which sounded like “kwa-ha-ha.”

It is believed that the Quagga was around 8 feet long and 4-4.5 feet tall at the shoulder. Unlike other zebras, it had a limited pattern of brown and white stripes that were primarily on the front of its body, with a rear that was brown and without stripes. Little is known about the Quagga’s behavior. They were said to be wild and lively, yet more docile than the Burchell’s zebra. Before they were hunted to extinction, they were primarily found in great numbers in the Karoo of Cap Province and the southern part of the Orange Free State in South Africa.

When the Dutch began to settle in South Africa, the Quagga was hunted heavily because it competed with domesticated animals for forage. The Quagga was easy to find and kill, and was also hunted for meat and for their skins, which were traded or used locally. By the 1850’s the Quagga had disappeared from most of its natural range. The last known wild Quagga died in 1878. Prior to this, some animals were captured and shipped to Europe to be displayed in zoos. Breeding programs were set in place to save the Quagga from extinction, but they were unsuccessful. Only one Quagga was ever photographed alive, and only 23 skins are preserved today. The last captive Quagga died in Amsterdam on August 12, 1883.

The Quagga was the first extinct animal to have its DNA analysed, and the Quagga Project is trying to recreate the hair coat pattern and related characteristics by selectively breeding Burchell’s zebras. To differentiate between the Quagga and the zebras of this project (who are not Quagga, but lookalikes instead), the Quagga Project refers to their bred animals as “Rau Quaggas”. The introduction of these lookalike Quaggas back to the Western Cape area could be part of a beneficial restoration project to combat non-native trees and also maintain indigenous vegetation by grazing.

I feel a great love for the Quagga, since one of the goals of my Horses of the World illustrations is to spread awareness and encourage conservation of endangered breeds. The Quagga is the only extinct breed currently in the series, and I absolutely love telling people about it at in-person shows when someone inquires about them. I had a great time drawing and coloring this mare and her foal while imagining the Quagga brought back from extinction and once again roaming their native lands. Maybe one day the technology will exist to extract DNA from the preserved skins and clone the Quagga so that the actual distinct subspecies can be brought back, instead of just a zebra of similar coloring!

Did you know about the Quagga before? If you know someone who would like to learn about this zebra subspecies, use the buttons below to share it with them!