Beautiful white Angora Cat with one blue and one green eye, illustrated on a map of Turkey, has been printed on high-quality paper and attached to a wooden ornament. The opposite side has the breed name and some information on it. Both sides have been sealed with a coat of clear resin to prevent peeling and chipping. Please take care when storing and displaying, as improper handling may result in fading or yellowing. Do not display in direct sunlight.

Like all domestic cats, Turkish Angoras descended from the African wildcat (Felis silvestris lybica). Their ancestors were among the cats that were first domesticated in the Fertile Crescent. Cats from eastern mountainous regions of Anatolia developed into longhaired breeds like the Turkish Van and the Turkish Angora through inbreeding and natural selection. The breed has been documented as early as the 17th century and is believed to be the origin of the mutations for both the color white and long hair. The breed is also sometimes referred to as simply the Angora or Ankara cat.

Learn more about the Turkish Angora on Wikipedia. 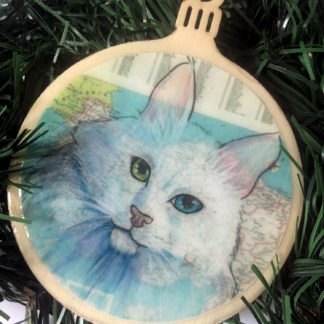