Matted Print of the Chincoteague Pony breed from the “Horses of the World” series of horse breeds illustrated on vintage maps. High-quality print on glossy photo stock, matted with a white 11×14 mat. Ready to frame and display!

The Chincoteague Pony, also known as the Assateague horse, is a breed of horse that developed and lives in a feral condition on Assateague Island in the United States states of Virginia and Maryland. The breed was made famous by the Misty of Chincoteague series of novels written by Marguerite Henry starting in 1947. While phenotypically horse-like, they are commonly called “ponies”. This is due in part to their smaller stature, created by the poor habitat on Assateague Island. Variation is found in their physical characteristics due to blood from different breeds being introduced at various points in their history. They can be any solid color, and are often found in pinto patterns, which are a favorite with breed enthusiasts. Island Chincoteagues live on a diet of salt marsh plants and brush. This poor-quality and often scarce food combined with uncontrolled inbreeding created a propensity for conformation faults in the Chincoteague before outside blood was added beginning in the early 20th century. 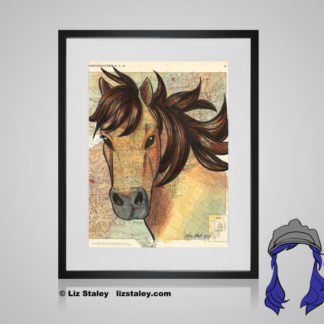