A Gypsy Vanner horse, illustrated on a map of Ireland, has been printed on high-quality paper and attached to a wooden ornament. The opposite side has the breed name and information about the breed. Both sides have been sealed with a coat of clear resin to prevent peeling and chipping. Please take care when storing and displaying, as improper handling may result in fading or yellowing. Do not display in direct sunlight.

The Gypsy Cob, also known as the Traditional Gypsy cob, Irish Cob, Gypsy Horse or Gypsy Vanner, is a type or breed of domestic horse from the island of Ireland. It is a small, solidly-built horse of cob conformation and is often, but not always, piebald or skewbald; it is particularly associated with the Irish Traveller and Romani traveling peoples of Britain and Ireland. There was no stud-book or breed association for horses of this type until 1996. It is now considered a breed and can be registered by the Traditional Gypsy Cob Association (TGCA). From about 1850, traveling people in the British Isles began to use a distinct type of horse to pull their vardos, the caravans in which they had just begun to live and travel. The color and look of the breed were refined in the years after the Second World War. Horses of this type were first exported to the United States in 1996.  Learn more about the Vanner horse on my blog! 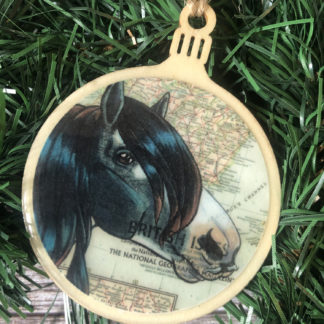