1 in stock (can be backordered)

Matted Print of the Morgan breed from the “Horses of the World” series of horse breeds illustrated on vintage maps. High-quality print on glossy photo stock, matted with a white 11×14 mat. Ready to frame and display!

The Morgan horse is one of the earliest horse breeds developed in the United States. Tracing back to the foundation sire Figure, later named Justin Morgan after his best-known owner, Morgans served many roles in 19th-century American history, being used as coach horses and for harness racing, as general riding animals, and as cavalry horses during the American Civil War on both sides of the conflict. Morgans have influenced other major American breeds, including but not limited to the American Quarter Horse, Tennessee Walking Horse and the Standardbred. 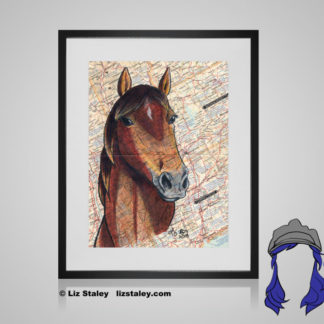