An adorable Shiba Inu dog, illustrated on a map of Wales, has been printed on high-quality paper and attached to a wooden ornament. The opposite side has the breed name and information about the breed. Both sides have been sealed with a coat of clear resin to prevent peeling and chipping. Please take care when storing and displaying, as improper handling may result in fading or yellowing. Do not display in direct sunlight.

Originally, the Shiba Inu was bred to hunt and flush small game, such as birds and rabbit. Shiba lived in the mountainous areas of the Chūbu region. During the Meiji Restoration, western dog breeds were imported and crosses between these and native Japanese breeds became popular. From 1912 to 1926, almost no pure Shiba remained. From around 1928, hunters and intellectuals began to show interest in the protection of the remaining pure Shiba; however, despite efforts to preserve the breed, the Shiba nearly became extinct during World War II due to a combination of food shortage and a post-war distemper epidemic. All subsequent dogs were bred from the only three surviving bloodlines. Learn more about the Shiba Inu at the American Kennel Club.

Want a print of this art? Grab it here! 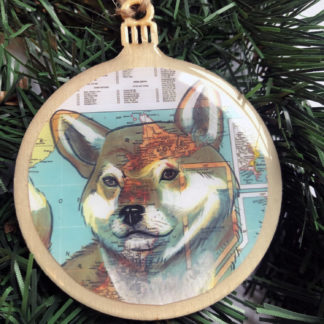