A beautiful Siberian Husky, illustrated on a map of Siberia, has been printed on high-quality paper and attached to a wooden ornament. The opposite side has the breed name and information about the breed. Both sides have been sealed with a coat of clear resin to prevent peeling and chipping. Please take care when storing and displaying, as improper handling may result in fading or yellowing. Do not display in direct sunlight.

The Siberian Husky was originally developed by the Chukchi people of the Chukchi Peninsula in eastern Siberia. They were brought to Nome, Alaska, in 1908 for sled-dog racing. In 2015, a study using a number of genetic markers indicated that the Husky, the Alaskan Malamute and the Alaskan husky share a close genetic relationship between each other and were related to Chukotka sled dogs from Siberia. They were separate to the two Inuit dogs, the Canadian Eskimo Dog and the Greenland Dog. In North America, the Husky and the Malamute both had maintained their Siberian lineage and had contributed significantly to the Alaskan husky, which showed evidence of crossing with European breeds that were consistent with this breed being created in post-colonial North America. Learn more about the Husky at the American Kennel Club!

Want a print of this art instead? Grab it here! 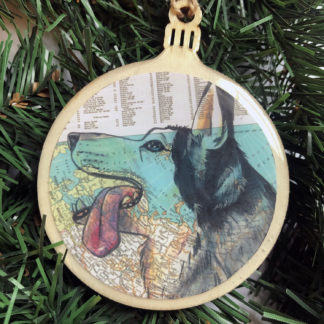