An awesome Triceratops , illustrated on a map of Colorado, has been printed on high-quality paper and attached to a wooden ornament. The opposite side has the breed name and some information about it on it. Both sides have been sealed with a coat of clear resin to prevent peeling and chipping. Please take care when storing and displaying, as improper handling may result in fading or yellowing. Do not display in direct sunlight.

Although Triceratops are commonly portrayed as herding animals, there is currently little evidence that they lived in herds. While several other genera of horned dinosaurs are known from bone beds preserving bones from two to hundreds or thousands of individuals, to date there is only one documented bonebed dominated by Triceratops bones: a site in southeastern Montana with the remains of three juveniles. It may be significant that only juveniles were present. In 2012, a group of three Triceratops in relatively complete condition, each of varying sizes from a full-grown adult to a small juvenile, were found in Wyoming, near Newcastle. The remains are currently under excavation by paleontologist Peter Larson and a team from the Black Hills Institute. It is believed that the animals were traveling as a family unit, but it remains unknown if the group consists of a mated pair and their offspring, or two females and a juvenile they were caring for. Learn more about Triceratops at Wikipedia.

Want to see more of my dinosaur art? 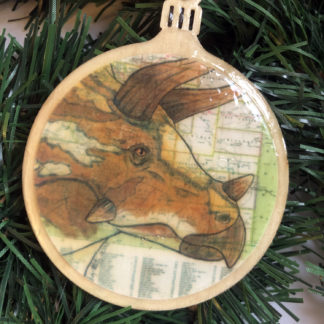