This is a print of my original work. I scan my drawings at home and print them in high-quality on glossy paper at 8×10 inches. Each print is then matted to 11×14 inches and is ready to pop into a standard picture frame and hung on a wall. All of my prints are shipped boarded and bagged with sustainable, recycled packaging that is attached to a foam board and shipped in a poly mailer. The watermark from the second image in this listing will NOT appear on your print and is only to protect my work from internet theft.

This sweet Gypsy Vanner horse is modeled after a real Gypsy horse I met and took photos of (with permission of the owner!). He is black and white, with a long and flowing black mane, and a “mustache” on his soft nose. He is drawn on a map of Ireland.

The Gypsy Cob, also known as the Traditional Gypsy cob, Irish Cob, Gypsy Horse or Gypsy Vanner, is a type or breed of domestic horse from the island of Ireland. It is a small, solidly-built horse of cob conformation and is often, but not always, piebald or skewbald; it is particularly associated with the Irish Traveller and Romani travelling peoples of Britain and Ireland. There was no stud-book or breed association for horses of this type until 1996. It is now considered a breed and can be registered by the Traditional Gypsy Cob Association (TGCA). From about 1850, traveling people in the British Isles began to use a distinct type of horse to pull their vardos, the caravans in which they had just begun to live and travel. The color and look of the breed were refined in the years after the Second World War. Horses of this type were first exported to the United States in 1996. 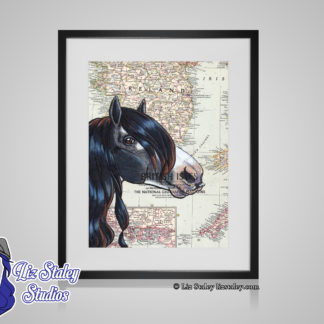