Matted Print of the Trakehner breed from the “Horses of the World” series of horse breeds illustrated on vintage maps. High-quality print on glossy photo stock, matted with a white 11×14 mat. Ready to frame and display!

Trakehner is a light warmblood breed of horse, originally developed at the East Prussian state stud farm in the town of Trakehnen from which the breed takes its name. Horses such as the Trakehner were used in World War II which, at the end, nearly destroyed the breed as Soviet troops advanced from the East, causing flight and expulsion of Germans during and after WWII. The main Stud and local residents were given permission to evacuate on 17 October 1944. Their journey West, known as Der Treck (“The Flight”), sent the horses on a dangerous journey in frigid conditions across the frozen Vistula lagoon without proper rations or shelter. It is considered one of the toughest tests to which an entire breed of horses has been submitted. 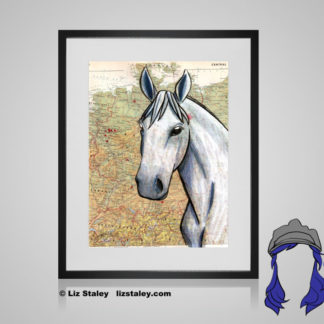