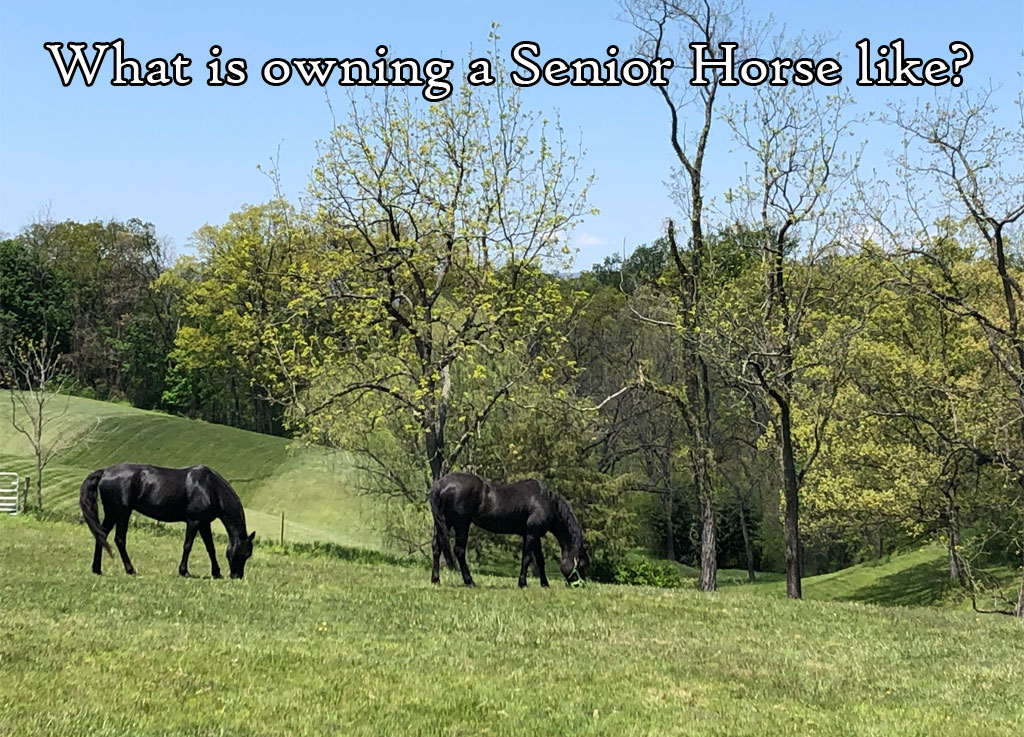 I seem to have come into horses at a time when the term “senior horse” is changing its definition. From what I understand, it used to be that a horse in its 20’s was a senior horse. But with current vet care, better dental care, better understanding of nutrition, and new medications, horses are living longer and healthier lives. I’ve seen some horses in their 30’s and up who are doing endurance rides and still look like they’re in their teens! It’s been said that “30 is the new 20” when it comes to horses right now.

I met Glory when she was 16 years old, and she became officially mine when she was 18. Next month, as of this writing, she will be 23 years old. So, I own a Senior horse. Some people would have considered her a senior horse when I met her. Sometimes it’s hard for me to think of Glory as a Senior, because to me she is still as sassy as she’s always been. But, she is starting to show signs of her age. She’s had Cushing’s since she was 18, so she turns into a wooly mammoth in the winter and is always just a little bit “ribby”. Her back is starting to sway a bit, and she’s getting gray in her mane and tail. When I met her, she had just a tiny bit of white on her forehead, but now the white is spreading between her eyes and I keep joking that in a few years I’ll have the horse with the big blaze that I’ve always wanted!

Owning a Senior horse is, in a word, interesting. I think in some ways it’s just as challenging as owning a younger horse. You just have different things to worry about.

The first thing I remember starting to struggle with as Glory aged was keeping her at a good weight. We’ve had to tweak her nutrition quite a lot in the past few years to keep her where she needs to be. And, to be honest, she could probably use some more protein in her diet at the moment so that she can maintain what muscle she has. Switching to a Senior Feed has definitely helped, and of course the Cushing’s doesn’t really help when it comes to the weight struggle (it’s not like she can just be let out in a big green pasture to fatten up, after all!).

Another problem that stems from the Cushing’s is her winter coat. Glory turns into a Wooly Mammoth when winter comes, and that long winter hair is a pain to shed out! The first year that I fully owned my horse, she didn’t finish shedding out until the middle of a hot summer- just about time to start growing in the next winter coat! I have tried a variety of shedding tools, including Striphair, SleekEZ, and Hands-On Grooming Gloves. (To see which ones still live in my grooming box, check out this post of my favorite grooming products!) This year has been one of the easiest ones as far as getting her winter coat shed out, and I think that’s partially from good nutrition, partially from a good balance of medication, and partially because I gave her a trace clip back at the beginning of the year, so there was less hair to shed out! 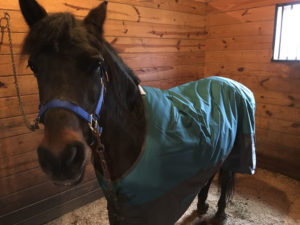 This next subject might be a bit controversial, because there seems to be a big debate in the horse community about whether or not horses should be blanketed. My personal opinion is that if the horse needs extra help, they should have a blanket. Because of the weight gain problems that Glory began having the past few years, I’ve acquired a moderate collection of blankets to keep her warm and dry in nasty weather. It started with one medium-weight turnout, and has grown to include a turnout sheet, medium-weight blanket, heavy-weight blanket, fly sheet, fleece cooler, and a second-hand stable sheet.

Owning a Senior horse means that you also start thinking about things like joint supplements. Glory is having some time off right now because she’s begun to show signs of pain in her rear right leg, and we think it might be arthritis in the hock or stifle. So, until our next scheduled vet appointment in a few weeks, she’s living the good life of just being fed, brushed, loved, and fed cookies.

And that brings me to the hardest thing about owning a Senior horse: I know that, someday, I’m going to have to say good-bye. We had a scare the other weekend where it had gotten really cold here suddenly and Glory wasn’t eating anything. We thought she was acting like she was in pain, so the vet advised some Bute and just keeping an eye on her. Every time Glory seems to be a little off or acting like she’s sick, it scares me half to death if we don’t know what’s causing it. When she wasn’t being herself the other week, I was so upset that I cried myself to sleep that night with worry. I nearly stayed out at the barn instead of going home that night, but I knew there would’ve been nothing I could do if I was at the barn. She’s been fine since then, but it was a terrifying experience.

I think we always know that our time with these incredible animals is limited, whether we get them when they’re young or when they’re in their golden years. But as Glory’s gotten older, it’s becoming more and more likely that I’ll need to let her go at some point. She’s 23, so I may get another 10 years with her or I might only get another 2 years. There’s no way of knowing when she’ll be gone from my life, and I think about that a lot. It’s heart-wrenching to think about losing her, but I know it will happen one day.

My one hope is that when that day comes,  I can do whatever needs to be done for my horse. And that she knows I will never love another horse the way that I love her.

1 thought on “What It’s Like Owning a Senior Horse”