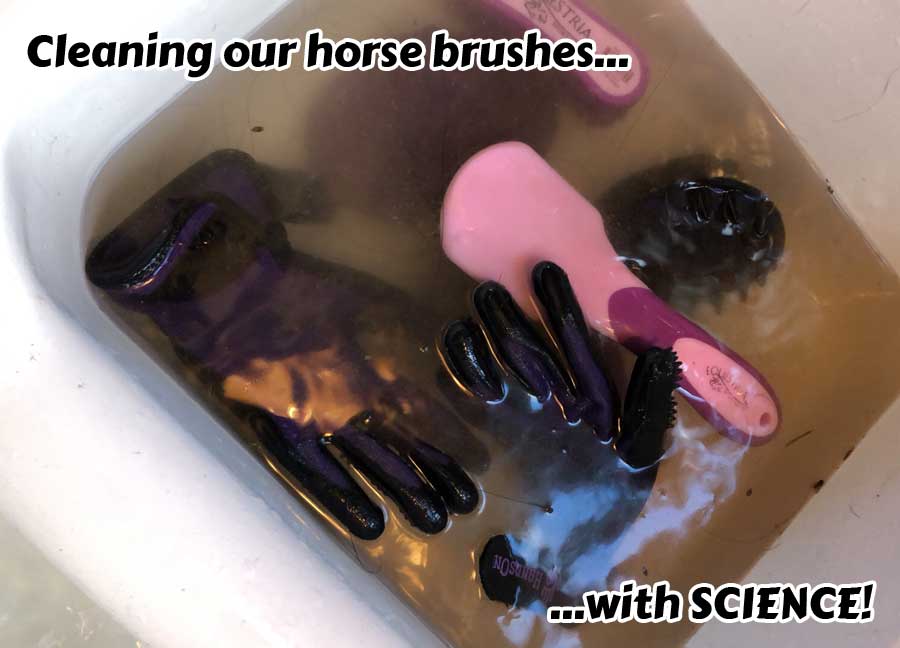 Wow, it’s February already! January felt both extremely long and like it went by in a flash.

Today I wanted to write about a fun project that my best friend and I started two weeks ago, and we’re having so much fun with it that we’re hoping to really branch out! There’s a little backstory though that I’m going to talk about but not go into too much detail about because I don’t want to paint anyone involved in a bad light. The story I’m about to tell is true, but I won’t be calling anyone out.

A while ago, I purchased some brush cleaning items from a small business. I liked the brush cleaning items enough that I recommended them to another friend, who placed an order in summer 2019 with the same business. Weeks passed and the order never showed up. After several attempts to contact the seller, my friend got a message saying that this person had suffered an injury, that someone was coming to help them fill orders, and that they’d get their items soon along with a free gift to make up for the delay.  So, they waited another few weeks for their order to show up, but it never did. It still, to this day, has never arrived, and the seller disappeared off the face of the Earth instead of continuing to communicate with those who were waiting for their items.

Since I’m a small business owner myself, I totally understand getting behind on things- especially if an emergency happens. But what I don’t understand at all is getting an order from someone and then not only not delivering the item that was ordered but also not communicating. So, since we were all disappointed by this turn of events, Kennedy and I decided to do something nice for our friend. We decided to learn how to make “bath bombs” that would clean horse brushes!

First, we had to do some research on the ingredients that we’d need. We wanted our brush cleaner to have a satisfying FIZZ when added to water, to smell nice, and to be antimicrobial. But they also couldn’t leave any residue that would be difficult to rinse out. We decided on a recipe and some secret ingredients to use, then set to work on our prototypes.

As with any new product prototype, we ran into some issues with the first batch. Since we only had two of our molds and we wanted to make four different scent blends on the day we were making prototypes, we decided to try to “kiln dry” our brush fizzies in an oven that was set on a low temperature. Little did we know that we had added too much of our wet ingredient and there was a chemical reaction going on that made them puff up out of the molds! Plus the heat from the oven made the edges hard and almost melted? So that experiment did not work at all! 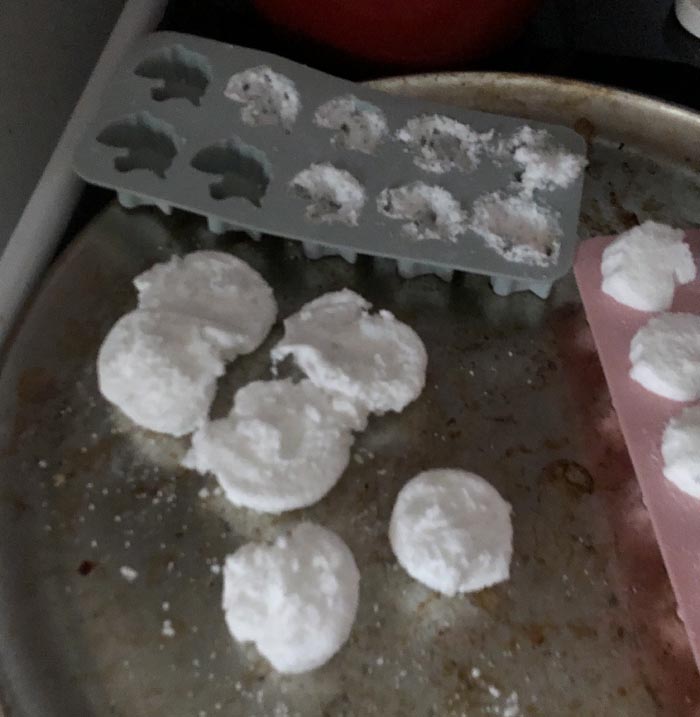 Once we got those out of the molds, though, we started to get the hang of things. The batch that got messed up turned into our testing batch and we used every single one of them that day to clean brushes with because we were having too much fun tossing them in the water and watching them fizz. Plus, the amount of dirt and grime they got out of our brushes was insane! I’d cleaned Glory’s brushes a few weeks prior, but even then the water was coming out gross and dirty. As we mixed and tested, we came up with fun names for each of our scent blends.

Now that we had our brush cleaners made and tested, I got to do the really fun part- design packaging! We wanted a label for each individual scent, as well as a label that would go on a larger bag to contain a collection of different scents. By the time I got to designing packaging, we had come up with six different scent blends (and now we have two more on the way, for an even eight!) 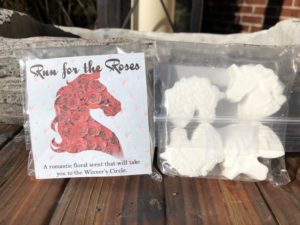 “Run for the Roses”- A romantic floral scent that will take you to the Winner’s Circle. This blend was inspired by the wreaths of flowers given to winning racehorses. 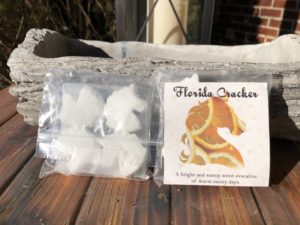 “Florida Cracker”- A bright and sunny scent evocative of warm and sunny days. This blend is made from orange and lemon and has a zesty, bright scent! (This was the first blend I created and the initial batch is what is pictured in the image where the brush fizzies puffed up and didn’t come out of the mold correctly, but the ones in this photo turned out perfectly now that we have the recipe down!) 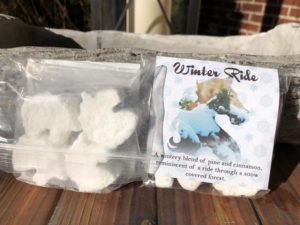 “Winter Ride” – A wintery blend of pine and cinnamon, reminiscent of a ride through a snow-covered forest. This is one of my favorite blends. It smells so nice and like you’re riding through an evergreen forest! The cinnamon also reminds me of the cinnamon pine cones you can get around Christmas. 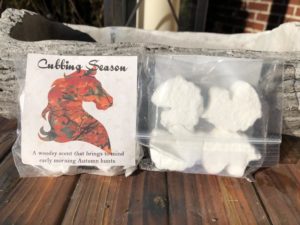 “Cubbing Season”- A woodsy scent that brings to mind early morning Autumn hunts. This blend is so nice. It really reminds me of the woods in Fall because of the oils that Kennedy put into it! 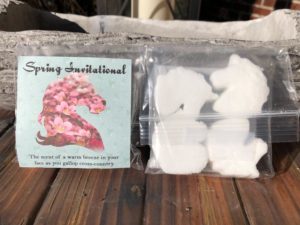 “Spring Invitational”- The scent of a warm breeze in your face as you gallop cross-country. The best word to describe this blend is “green”. It’s not exactly a floral scent, but more the smell of nature. 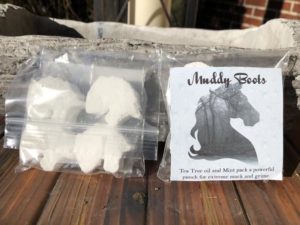 “Muddy Boots” – Tea Tree Oil and Mint pack a powerful punch for extreme muck and grime. First of all, I am so proud of the name I came up with for this blend. This is like our “super cleaner” for when you really need to fight some nasties. I did add quite a bit of mint though because it has come to my attention that not everyone likes the smell of tea tree oil as much as I do.

We have two more blends in the works, “Mare Stare” (Dragonsblood) and “Foal Watch” (Lavender), but I don’t have photos of those. 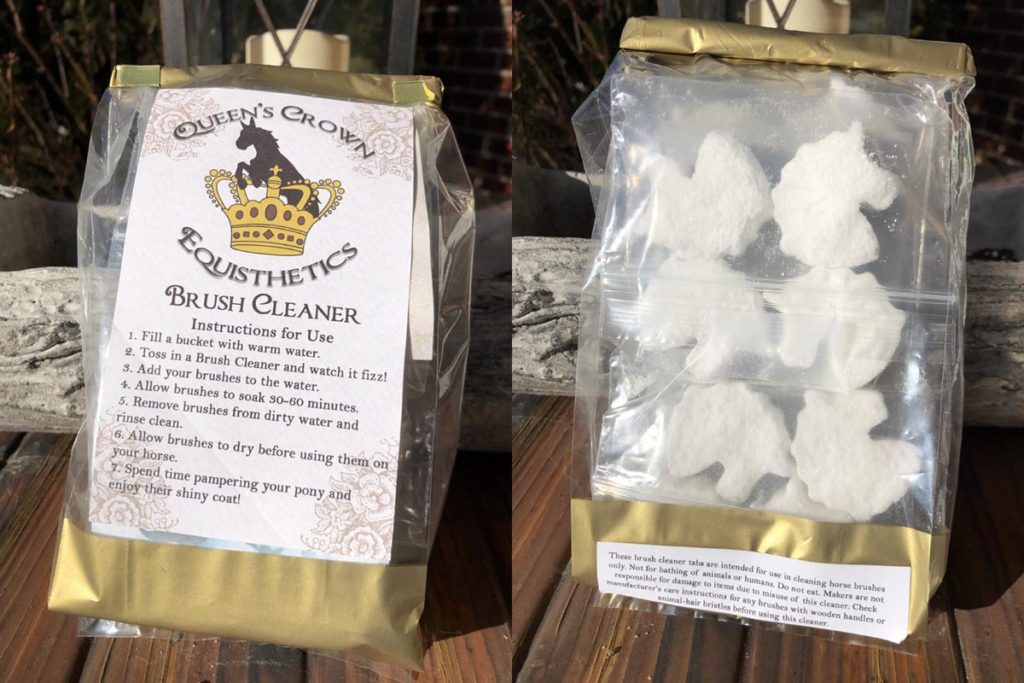 And here’s our big packet of assorted scents! The large bag holds four of the four-packs, so it contains 16 brush fizzies. We’re hoping to start selling these to other people who want a fun and easy way to clean their grooming stuff. The tabs fizz really nicely when you toss them in water (Click here for a video!), they get the gunk out of the bristles, and they rinse clean very easily. So, we met all our requirements for brush cleaners!

After we had these packed up, we delivered them to our friend who never got her order from the other seller. She was so happy that we surprised her with these that she cried a little! I can’t wait for her to test out her cleaners and tell us how she likes them. We really enjoyed using our test ones!

How do you like to clean your brushes? Let me know in the comments!