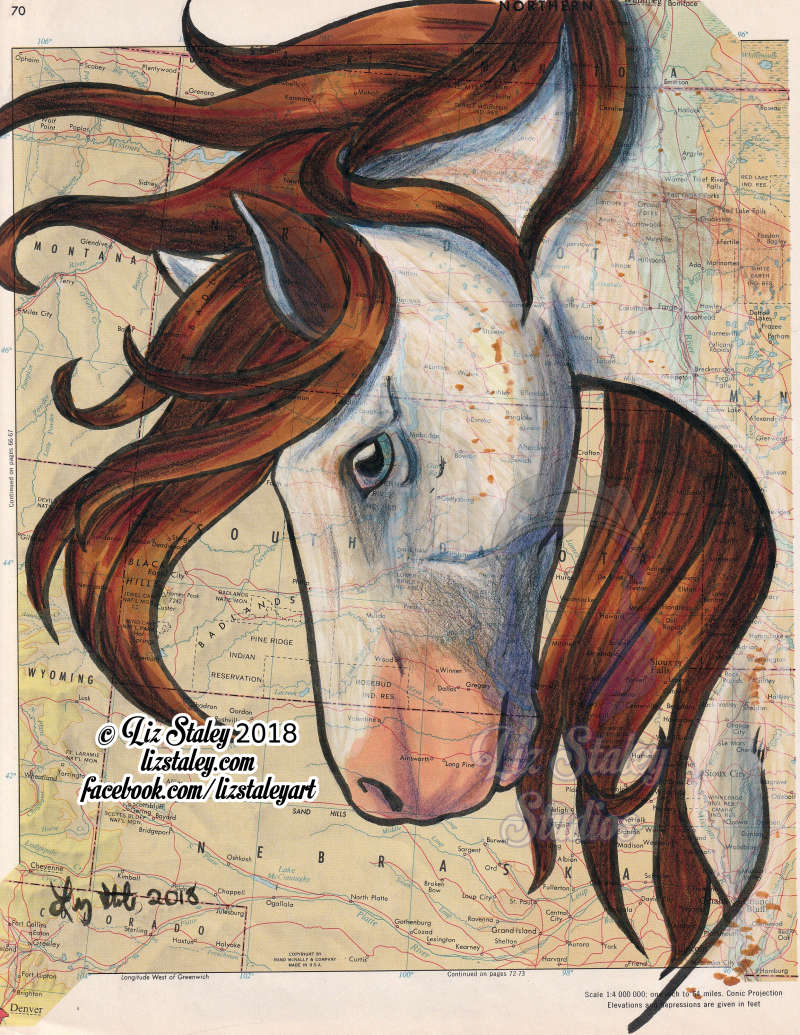 By the early 20th century, the feral and semi-feral horse known as the Nokota was nearly wiped out by ranchers and state and federal agencies in North Dakota. When Theodore Roosevelt National Park was created in the 1940’s, a few bands of Nokota were inadvertently trapped inside by workers, and were thus preserved.

The Nokota horse developed in the 19th century in the southwestern corner of North Dakota, in an area known as the Little Missouri River Badlands. Horses from domestic herds mingled with the original feral herds. Ranchers often crossbred Spanish horses from the southwest, local Native American ponies, and various draft, harness, Thoroughbred, and stock horses to create hardy and useful ranch horses. The Nokota horse has an angular frame and prominent withers, usually standing between 14.2 to 17 hands. They often exhibit an ambling gait called the “Indian Shuffle”. They are often blue roan in color, which is rare in other breeds. Black and gray are also common colorations for the Nokota. Less common colors include red roan, bay, chestnut, dun, grullo, and palomino. Pinto patterns occur on occasion.

Nokota horses today are used in many horseback riding events, including endurance riding, western riding, fox hunting, dressage, three-day eventing, and show jumping. The breed is described by fans as “versatile and intelligent.”

There are two commonly cited sources for the Nokota name. One source states that the Nokota gets its name from the Nakota people who inhabited North and South Dakota. The other origin claims the name comes from a combination of North and Dakota, and was created by the Kuntz brothers.

In 1884, a ranch near Medora, North Dakota, called the HT Ranch purchased 60 mares from a herd of 250 Native American-bred horses that were originally confiscated from the Lakota leader Sitting Bull in 1881. Some of the mares were bred to the Thoroughbred racing stallion Lexington, also owned by the ranch.

By the early 20th century, the feral herds became the target of local ranchers who wanted to limit grazing competition for their own herds. Many horses were removed from the wild, used either for ranch horses, sold to slaughter, or killed. From the 1930’s to the 1950’s, federal and state agencies worked with the ranchers to remove the horses from western North Dakota. The species was all but extinct by the time that Theodore Roosevelt National Park was established in the 1940’s. During construction, a few bands of the horses were accidentally trapped in the park when the fence was constructed. By the 1960’s, these bands of horses were the last remaining feral Nokota in North Dakota.

Despite their status, the park sought to eliminate these feral bands of horses. The National Park Service was declared exempt from the Wild and Free Roaming Horses and Burros Act of 1971, an act that protected free-roaming horses and burros on other federal lands. This allowed the park to view the Nokota horses as a nuisance and deal with them as such, which included sending many of them to slaughter. In the 1970’s, public opposition to the removal of the feral horses prompted management strategy changes. Today, the herds within the Theodore Roosevelt National Park are managed for historical demonstration purposes.

In 1986, the park added outside bloodlines into the feral bands with the aim of modifying the appearance of the Nokota because management of the park felt the resulting horses would sell better at auctions. Dominant herd stallions were removed and replaced with a crossbred Shire stallion, a Quarter Horse stallion, an Arabian stallion, and two feral stallions from the Bureau of Land Management Mustang herds. At the same time, a large number of horses from the park were rounded up and sold. At this auction, Leo and Frank Kuntz purchased 54 horses, including the dominant stallion, because they were concerned about the welfare of the Nokota horses.

By 1993, the Kuntz brothers had a herd of 150 Nokota horses, including those purchased from the park over the course of several auctions and the descendants of those horses. The horses were mainly used for ranching and endurance races. In that year, the Nokota was declared the Honorary State Equine of North Dakota. In 1994 , researchers conducted a study of the horses in the park and on the Kuntz ranch. They discovered that none of the horses in the park and only about 20 on the ranch had characteristics consistent with the Colonial Spanish Horse. Since that study, the horses on the Kuntz ranch have been bred with the goal of maintaining and improving their Spanish characteristics. In 1999, the Kuntz brothers founded the Nokota Horse Conservancy to protect and conserve the Nokota horse. The Conservancy tracks around 1,000 horses throughout the United States.

In recent years, Theodore Roosevelt park has continued to thin the feral Nokota herd. Several round-ups were conducted throughout the 1990’s and the early 21st century. In the year 2000, the last horses to be considered of the “traditional” Nokota type were removed from the wild. Some were purchased by supporters of the Nokota Horse Conservancy. The National Park Service maintains a herd of 70 to 110 horses.

The Breyer Animal Creations annual “Benefit Horse” Campaign chose to honor the Nokota in 2006. A Breyer model was created, manufactured, and marketed throughout the following year, with a portion of the proceeds going to the Nokota Horse Conservancy. In 2006, the Kuntz family owned approximately 500 Nokota, with the Conservancy owning another 40. At that point, there were less than 1,000 living horses of the breed in the world.

Learn more about the Nokota Horse by visiting https://www.nokotahorse.org/