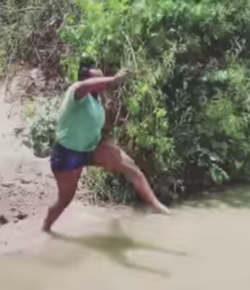 As someone whose horse won’t step a hoof in water unless another horse goes in first, this video made me laugh out loud!

Does your horse love the water or hate it? Have you ever gone swimming with your horse? Let me know in the comments!

Hey there blog readers! I have a writing deadline for a paid project that is fast approaching, so today’s blog is going to be a lazy one. Enjoy some of my favorite funny horse gifs that I found around the internet!

Do you pronounce GIF as “jiff” (like the peanut butter) or “gif” (like “gift”)? Let me know in the comments!

Over the past six (almost seven!) years that I’ve been around horses, I’ve taken and collected a lot of horse photos. Not only is my horse cute, but I’ve worked around a lot of horses and I’m always needing new reference photos to create art from. So I thought it would be a lot of fun to post some of my favorite photos, both that I’ve taken myself and ones that I’ve collected from around the internet. I hope you enjoy!

First of all, look at how adorable my Glory was as a baby! Isn’t she the cutest thing ever? She had a sassy face even at just a few days old!

Speaking of Glory, this is the best photo that I have of her sire, Edelweiss Magic Man. I have a couple photos of him from the people that bred her, but they are terrible and the colors have deteriorated over the years, so this is the clearest picture I have of him. Glory definitely gets her good looks from her Papa, because she looks nothing like her Dam!

Now for something completely different! This gif never fails to make me giggle with delight, so I look at it whenever I’m feeling down in the dumps. There’s just something so perfect and so ridiculous about the way that the gloves sit on the horse’s ears and the way that they move and it makes me very happy!

This photo of Glory is from our first winter together, I think. We were having a walk around the arena (this was before I started riding her, so I was hand-walking her) and she just stopped and looked out over the freshly fallen snow. It was so pretty that I actually did a watercolor painting of this photo at one point that I think my mom now has.

When I first got a tablet, I downloaded a horse game. The most realistic thing about that game was that you could brush your horses every ten minutes, and every ten minutes they would be covered in mud and dirt. This meme reminds me of that game.

This photo was taken by me and is of one of the many horses I worked with at my first barn job. He’s a Morgan gelding we called Chaz, and he was just the best. A sweet boy with a great personality. This photo was from one of his first days on the farm, and he was running around with his head up, snorting and carrying on, and I always thought this picture looked like it should be on the front of Morgan Magazine. I miss this horse very dearly, he was a sweet soul and I think about him often.

This was the face Glory made after I bought my first saddle and was trying it on her. I owned this saddle for a few years but ended up selling it and saving for a different one that I use now. This was an 18 inch Wintec Wide and I’ve since gone down to a 17 inch Wintec All-Purpose. I took these pics and didn’t notice until I looked back at them that Glory was sticking her tongue out in this one!

I found this photo on Tumblr a long time ago and it has never failed to make me laugh. I just love those big squishy lips! Bless the person who took this photo, it has brought me so much joy!

One last photo, because if I don’t put a limit on this we’ll be here all day. I love this photo of me and my best friend Kennedy riding our girls. This was right after we got our light-up breastplates and it was just so much fun to ride in them. Honestly, it still is fun to ride with lights on the horses and sometimes we put them on just because. (And sometimes we put them on because it gets dark very early now and we need to ride, but it’s already nighttime, so we need lights)