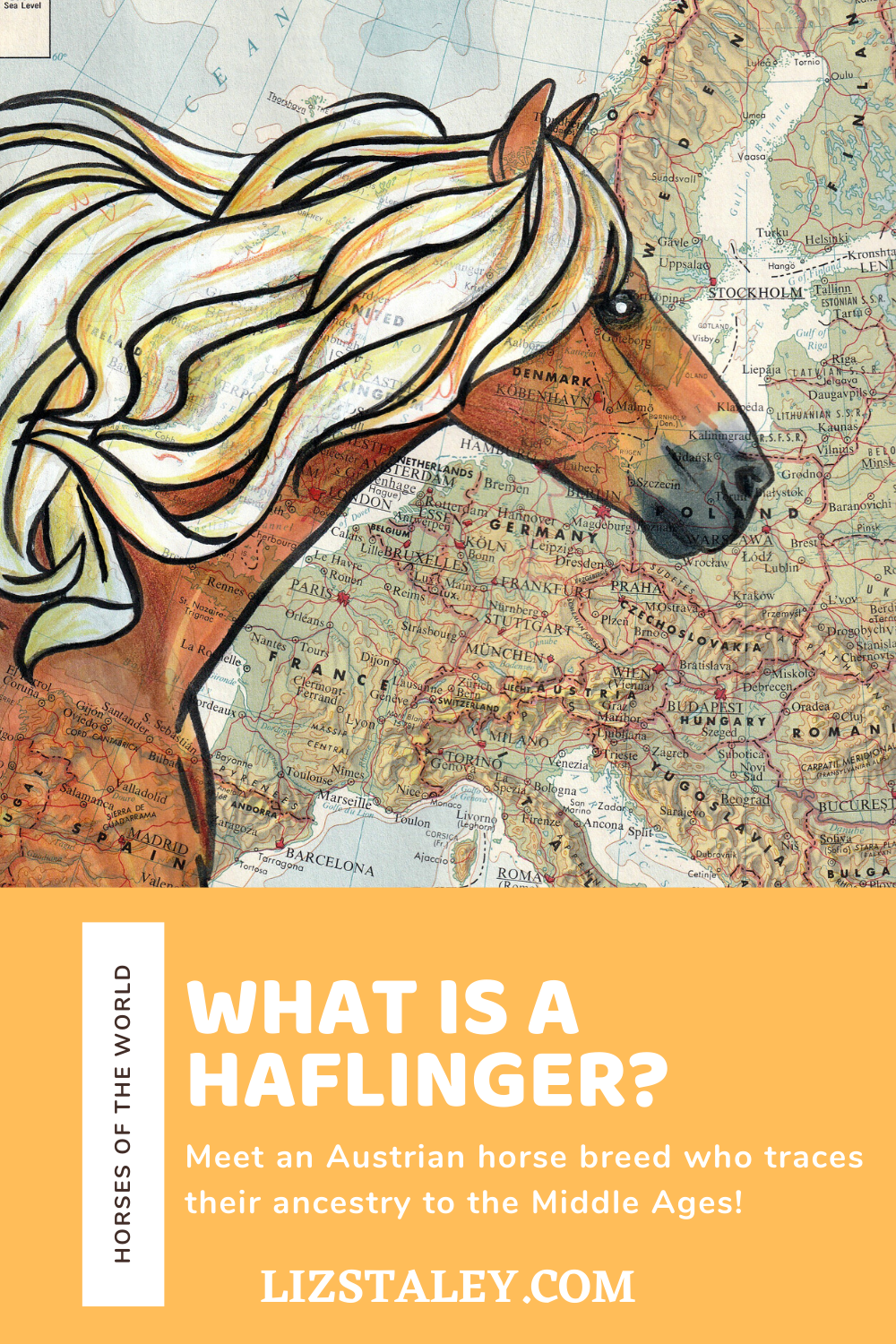 The Haflinger (also called the Avelignese), derives its name from the village of Hafling in what-is-today Northern Italy. Haflingers are always chestnut in color, with shades that range from light golden to a rich chestnut or liver hue. The mane and tail are white. Before World War II they stood an average of 13.3 hands, but since the end of the war the average height of the breed has increased. All of today’s Haflingers trace their lineage through one of seven stallion lines to the foundation stallion, Folie. It is tradition to give colts a name beginning with the letter or letters associated with their stallion line, and for fillies to be given a name beginning with the first letter of their dam’s name. The exceptions to this are in France and Italy, where different rules apply.

There are two theories for the beginning of the Haflinger breed. The first is that Haflingers descended from the horses who were abandoned in the Tyrolean valleys in Central Europe by the East Goths, who were fleeing from the Byzantine troops in 555 AD. It is believed that these abandoned horses were influenced by Oriental bloodlines and may explain the Arabian characteristics present in the Haflinger. Another theory is that the breed descended from a stallion from the Kingdom of Burgundy sent to the area by Louis IV when his son married Princess Margarete Maultasch in 1342. It has also been suggested that the Haflinger may be descended from a prehistoric forest horse. Whatever the origins of the haflinger, the breed thrived in the harsh conditions of the mountain climate, even with minimal maintenance.

The modern Haflinger was officially established in the village of Hafling. An Arabian stallion was imported to Austria in the 19th century, strongly reinforcing the Arabian influence on the breed. Because of the small gene pool of the origins of the breed, and the mountain environment it developed in, the breed has a fixed physical type and appearance. World War I resulted in many Haflingers being conscripted for military service, which interrupted many breeding programs. After the war, South Tyrol (including Hafling) was ceded to Italy while North Tyrol remained in Austria. This was extremely detrimental to the breed, as most broodmares were in South Tyrol and most studs were in North Tyrol, and little effort was made at cooperation between breeders.

After World War II, Haflinger breeding programs almost stopped entirely because the military stopped buying horses. It was decided that changes needed to be made to breeding to create a horse that better fit modern needs. The Tyrolean Haflinger Breeder’s Association was established and they implemented strict breeding protocols to increase the numbers of the Haflinger horses. Between 1950 and 1974, most horse breeds in Europe were decreasing in numbers, while the number of Haflingers were increasing.

Haflingers were bred to be a versatile horse under saddle, but also still solid enough for draft work and driving. The breed is used today in many activities, including draft and pack work, harness and combined driving, and many under saddle events including western show classes, trail and endurance riding, dressage, showjumping, vaulting, and therapeutic riding programs. They are still used by the Austrian and German armies for rough terrain work.  In 2003, a Haflinger became the first cloned horse, which resulted in a filly name Prometea.