Writing a blog about my artistic mission and philosophy feels a lot like a college art assignment, but I’ll do my best. It feels a bit like writing an artist’s statement, actually!

So what can I say about my mission and philosophy of creating art? I feel like I am, at my deepest heart of hearts, a storyteller. Whether I’m writing a novel, or a blog, or a comic, I like to tell a story. And when I’m drawing, whether it’s sketching or illustrating or doing sequential art, I still like to tell a story. Even a drawing of one character can tell a story. I keep this in mind most of the time when I’m drawing something. Some of my art (especially warm-up sketches) are just character studies. But they can be so much more. I love when I can create an illustration or a sketch that tells a story about the character or the creature on the page.

My Horses of the World series of drawings started off with this idea in mind. The vintage map pages that I use to draw on are beautiful, and nearly anything drawn on them would look wonderful. But the reason I choose the pages I do, and the reason I draw horses on them is first to tell a story. Each breed is drawn on the map page of the country where the breed originates from. An Arabian on Saudi Arabia, a Fjord horse on Norway, a Heihe on China. It can be easy here in the United States to see this different breeds and forget where they come from, both in the U.S. and in the world. We can see a Percheron or a Paso Fino and not really think about where that breed has come from, and what it means for a horse to be of that breed. So I hope these images make people think about the horses they love and the journeys they’ve made to come into our lives. 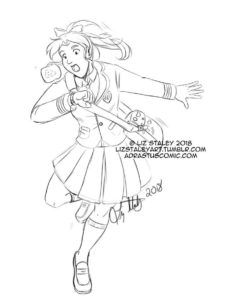 But even something like a quick character illustration or character design can tell a deeper story. For instance, one of my warmup sketches in early 2018, tells a story despite being fairly simple. The character in this sketch is from a novel series that I’ve been working on for a long time. I published the first back in 2009 and am currently working on the second book. The second book takes place two years after the first, so this character has aged a little bit but is still fairly young. In this sketch she is running late, as is obvious from her pose of running and her looking at her wrist to see the time on her watch.

But what else does the illustration tell us? I specifically put her in a school uniform so there is an idea of her age and that she attends a private high school. If I’d dressed her in her casual clothing it could have been more difficult to get a sense of her age, other than she’s obviously on the younger side. In different clothes and without the bow in her ponytail, she could be a young professional woman on her way to a meeting who’s just realized she’s about to miss her train. I gave her a messenger bag, but the bag is decorated with cute keychains and pins, another hint to her young age and to her cheerful personality.

These are the kinds of details that I think about when I try to tell a story with an illustration. Drawing images like this, that have a meaning and aren’t just a character standing around doing nothing, are my favorite types of images to draw!

One of the reasons I wanted to become an artist and writer and to tell stories in the first place is because of the stories I grew up with when I was a child. My parents read to us a lot when we were young. My brother and I were reading books at high reading levels from a young age. I’m the youngest of four children, and all three of my siblings are boys. I grew up as a bit of a tomboy (naturally, with three brothers!) in the 1980’s. My closest brother had bad asthma when we were young, and since he was my best friend we were inside much of the time. We played with toys, of course, but we also watched Saturday Morning Cartoons and such, especially after we got cable when I was a little bit older.

I remember watching shows like Teenage Mutant Ninja Turtles and GI Joe and Transformers and thinking “Where are the girls?!” Sure, April O’Neil was capable and competent in TMNT, but let’s face it, she was pretty much a damsel in distress most of the time. I never saw myself, a girl who was strong and capable, in any of the stories I watched as a child. I remember seeing Beauty and the Beast when it came out and nearly crying, because not only was there finally a Disney Princess who looked like me (brown hair, brown eyes), but who also was smart and strong. I didn’t want to play as a damsel in distress when my brothers and I played. I wanted to save the world just the same as the boys did! So when I began to write stories, I tried to include women and girls who saved the world and were just as capable as their male counterparts at being completely badass and heroic.

These two things, telling stories and inspiring young women to be strong, are the two things that are the most important to me in my art.