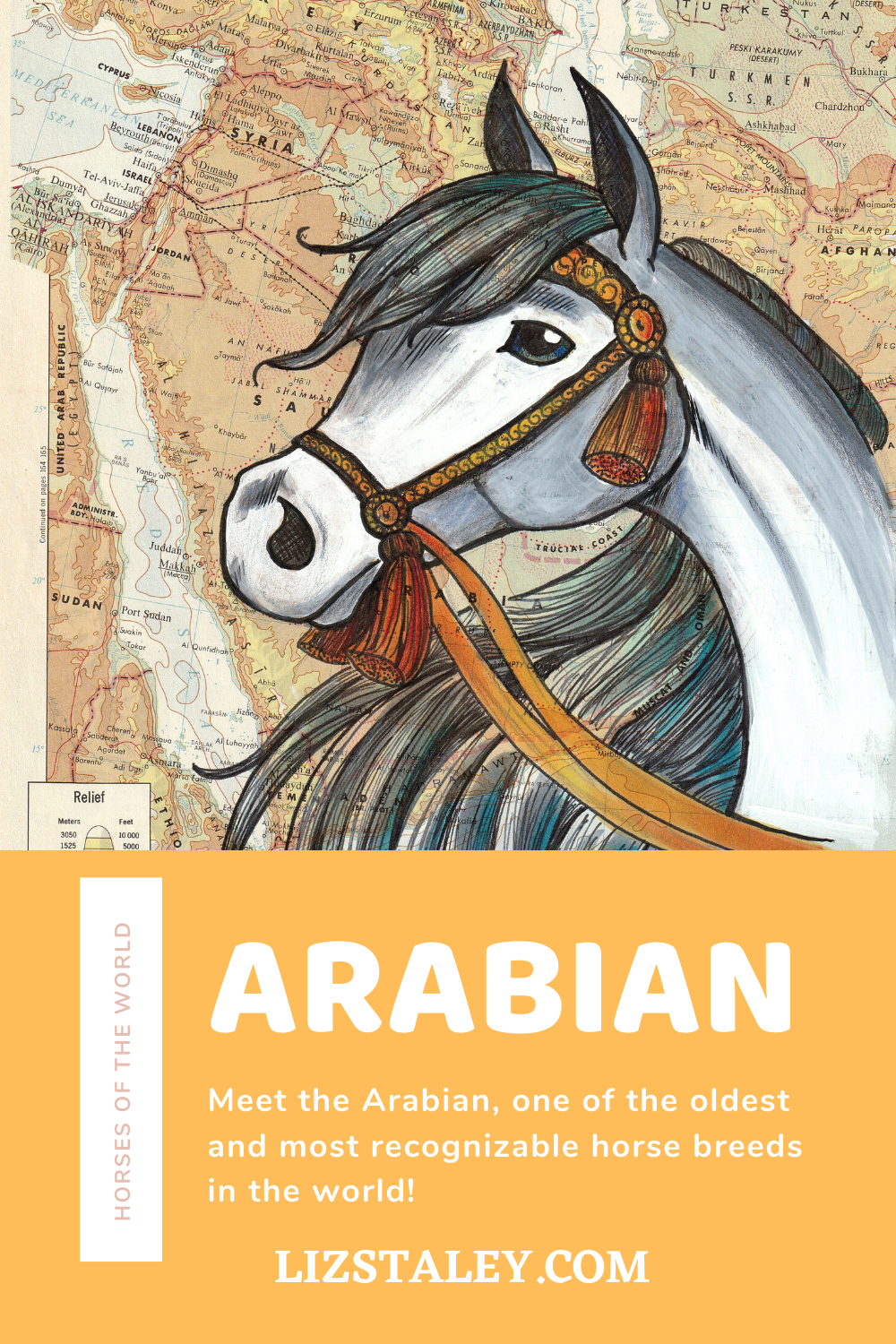 Several years ago, I was going through some of my books and found an old atlas that I’d had since I was a child. It was out of date and I’d been unable to get rid of it for some time. I wondered if there was anything I could do to repurpose the pages of the book. Suddenly, I had the idea to take the pages of the atlas and draw horses on the maps – breeds of horses that came from the areas depicted on the pages. The very first breed of horse I drew on a map page was the Arabian, and the “Horses Of The World” series was born! With each breed I add to the series, I hope to spark learning about these incredible animals and also the conservation of many breeds that are on the brink of extinction.

I drew the initial sketch and did the ink lines quickly, but then left the drawing as just line art for a long while until I finally decided to add color to my Horses of the World. The white parts of the Arabian horse are done with acrylic paint. The other colors and shading were then layered on with a combination of Copic markers and colored pencils. I learned from doing this first drawing in the series that I definitely like it best when the map shows through the horse, because to me the map is not just the background of the piece, but rather an integral part of the horse. These horses and their history are shaped by the area of the world they come from, and that is what I want to depict in every piece of the Horses Of The World series.

The Arabian horse is one of the oldest horse breeds in the world. Archaeological evidence of horses resembling the Arabian have been found in the Middle East dating back 4,500 years. It is one of the most easily recognizable horses in the world. Throughout history, the Arabian has spread around the world thanks to both war and trade. The breed has been used to improve other horse breeds by adding speed, endurance, and strong bone. The Arabian horse bloodline is found in almost every modern breed of riding horse.

There are several myths of the origin of the Arabian horse. One origin myth tells of how Muhammed gave his mares a test of their loyalty and courage by turning them loose after a long journey through the desert and let them race toward an oasis for a desperately needed drink of water. Before the herd reached the oasis, Muhammed called the herd back to him. Only five mares returned to their master, becoming his favorites and being named Al Khamsa– “The Five”. These mares became the legendary foundation mares of the five strains of Arabian horses.