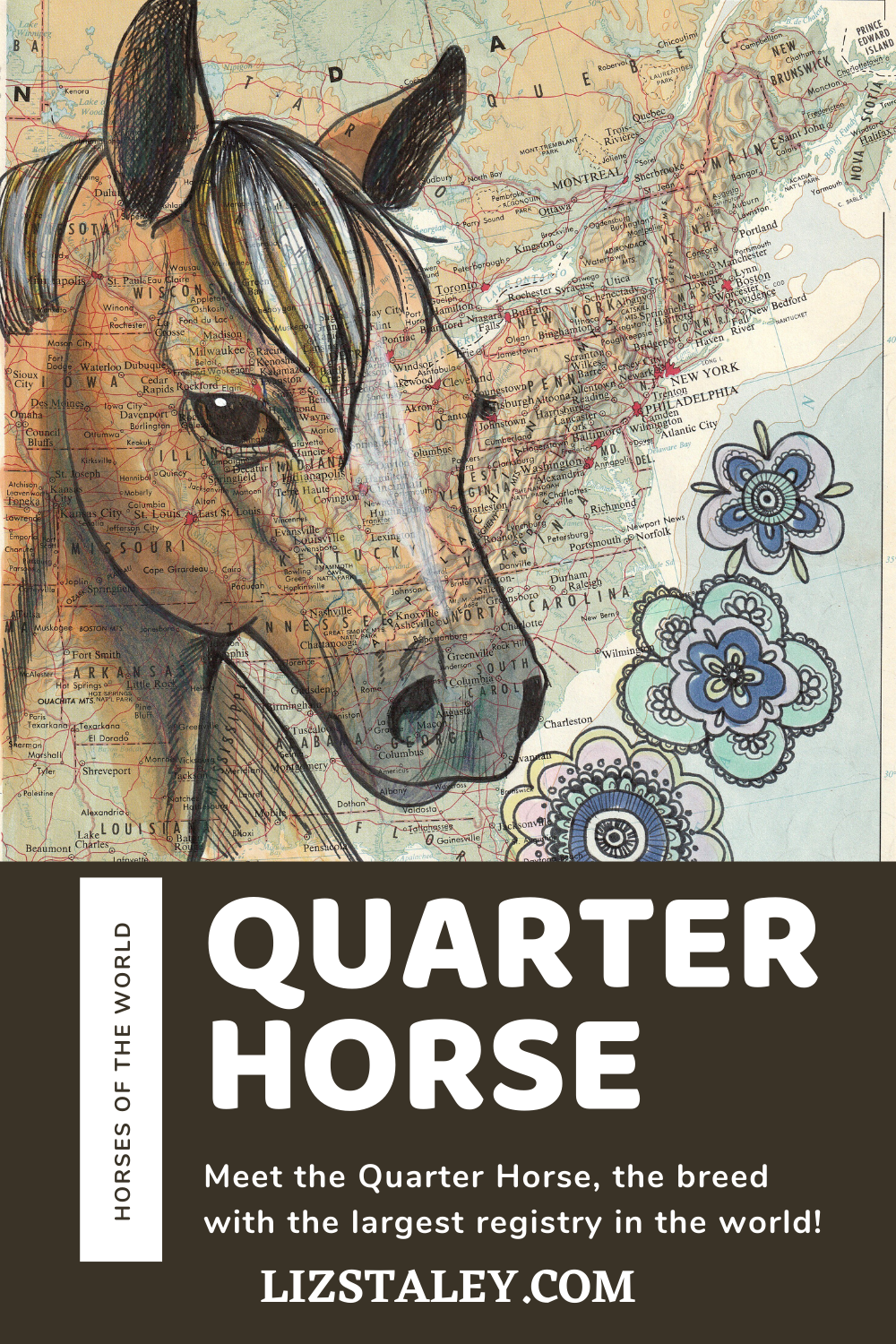 The Quarter horse is famous, to the point where it seems like even people who don’t know anything about horses knows about Quarter horses. The American Quarter Horse Association is the largest breed registry in the world. Because of their versatility for use in quarter horse racing, reining, showing, jumping, and more, they are an insanely well-known breed of horse! That’s why the Quarter Horse was one of the first 6 designs in the Horses Of The World series. I knew that I would have to have a Quarter horse in the line-up. When I think of the Quarter Horse, I think of a palomino with a cowboy on her back, heading out across the American plains. This is the only piece in this series that I added extra designs to. At the time, I felt like the water area of the map was just so empty, so I added some Western-style flowers.

This piece was done with India Ink, Copic markers, and colored pencils. A small amount of watered-down white acrylic paint was added for the white markings and mane on the horse. After doing the Arabian and Appaloosa, I realized that I needed to water down any paint that I used on these so that the paint wouldn’t completely cover the map areas.

Keep reading to learn more about the history of the Quarter Horse!

The American Quarter Horse gets its name from its ability to sprint short distances. This breed gets its name from its ability to outrun other horses in a race of a quarter-mile or less. Some Quarter horses have been clocked at running speeds of up to 55 mph! The Quarter horse breed began in the 1600s, when colonists on the Eastern seaboard of North America started breeding imported Thoroughbreds horses with breeds like the Chickasaw horse, a breed that was developed by Native Americans from horses brought to the Americas by Conquistadors. One of the most famous of the imported Thoroughbreds that contributed to the Quarter Horse breed was Janus, who was foaled in 1746 and moved to Colonial Virginia in 1756. Janus’ genes were crucial to the development of the small, hardy, and quick “Famous American Quarter Running Horse.”

Flat racing became popular with colonists, leading to the growing popularity of the Quarter Horse. The courses in the colonial races were shorter than classic racecourses in England, and were often just a flat, straight stretch of road or open land. Put up against a Thoroughbred, the sprinting Quarter Horse often won in these short, fast races!

Because of the compact body of the Quarter Horse, it is well suited for the quick and intricate maneuvers required of a horse involved in cutting, reining, calf roping, barrel racing, and other western riding events. Their athleticism is also useful in many English riding events, such as show jumping, dressage, and hunting. Quarter horses come in two types – the “stock” type and the “hunter” type. The stock horse is compact, shorter, stocky, and well-muscled but still agile. The hunter/racing type more closely resembles the Thoroughbred, with taller stature and smoother muscling.

Do you love the Quarter Horse breed? Use the Sharing buttons below to share this post with your social media followers!