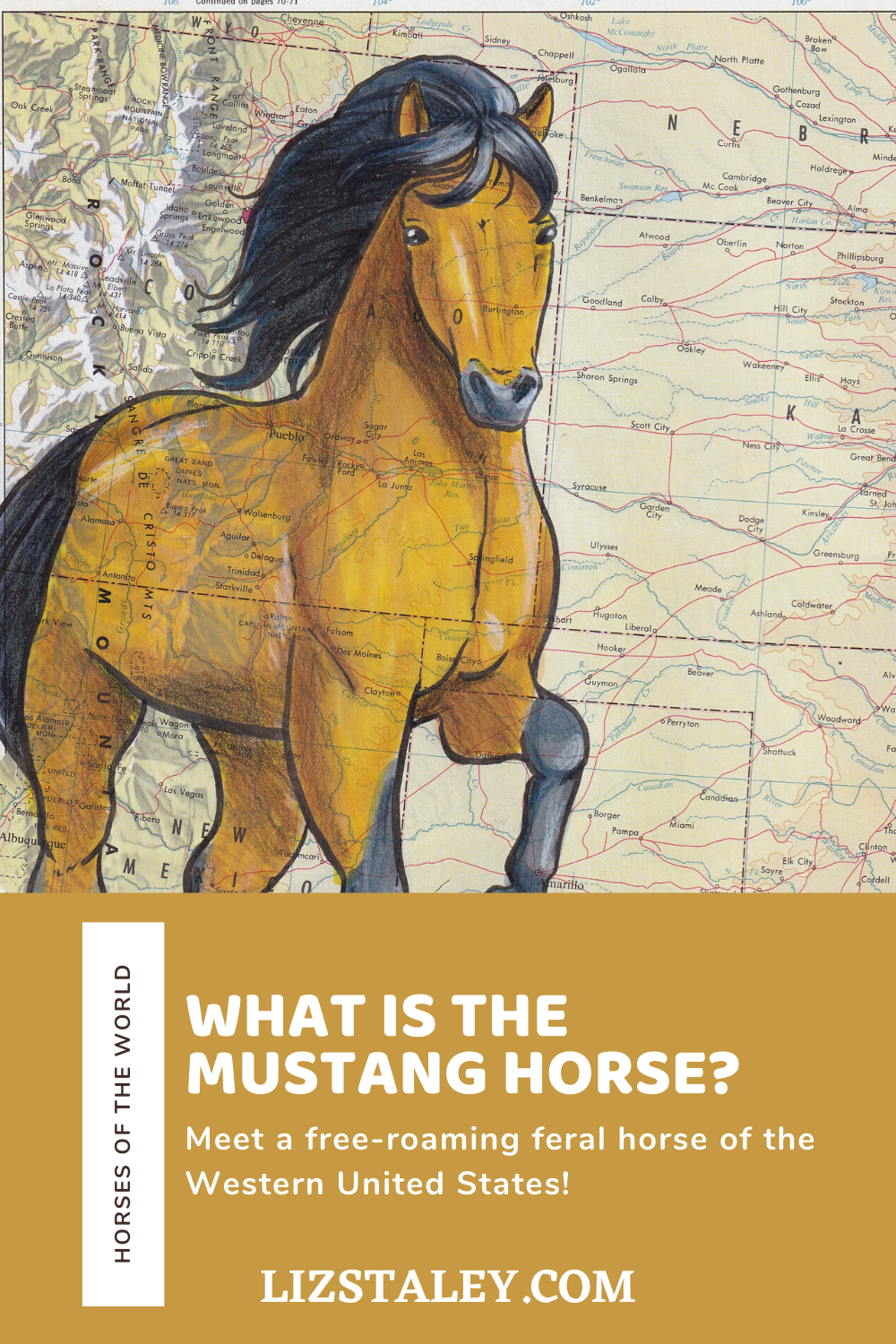 By the end of the last Ice Age, there were no equids in the Americas. Horses were first re-introduced to the continents beginning with Colombus, who imported horses from Spain to the West Indies in 1493. Domesticated horses didn’t come to the mainland Americas until Cortes arrived in 1519. By 1525, enough horses had been imported to create a horse breeding operation in Mexico. Native American peoples quickly adopted the use of the horse into their cultures, using them for transportation and replacing dogs as pack animals. The reintroduction of the horse changed many Native cultures, altering war, trade, and even the diet of some peoples.

Horses were traded throughout North America, but a great many of the horses that contributed to the feral Mustang herds were ones that wandered off into the wild. The Spanish generally did not keep their animals in fenced enclosures, making it easy for them to go astray. Originally, horses captured by the Native Americans were used for food. But some Natives who had learned horse-handling skills while kept as slaves by the Spanish escaped over the years – sometimes bringing domestic horses with them. This is the time when Native Americans began using the horses for riding and as pack animals.

It is estimated that around the late 1700’s to early 1800’s, there were as many as two to five million Mustang horses roaming western North America. In the early 1900’s, those numbers began dwindling. By 1930 the estimated population of free-roaming horses was between 50,000 to 150,000. They were almost completely confined to public lands and National Forest ranges in 11 Western states. The Bureau of Land Management (BLM) was formed by combining two other agencies. The BLM, along with the Forest Service, were committed to removing feral horses from the lands under their management.

By the 1950’s, the wild horse population had dropped to 25,000 horses. Capture methods were being abused, and included hunting horses from airplanes and poisoning entire water holes to get rid of the horses so the land could be used for cattle. These abuses led to the first federal free-roaming horse protection act being passed in 1959. From then until now, the BLM has established Herd Management Areas to determine where free-roaming horses will be sustained. In August 2017 it was estimated that 72,000 horses are still on the range, with over half of them being found in Nevada. Another 45,000 horses are in government holding facilities.

Since 1978, captured Mustang horses have been offered for adoption to individuals or groups willing and able to provide adequate and humane long-term care. The base adoption fee is around $125. Adopted horses are still protected under the federal act for one year after their adoption, after which the adoptee can obtain the full ownership of the horse. Despite means to promote adoptions, such as the Extreme Mustang Makeover, the number of adoptees doesn’t come close to being able to handle the excess number of horses. It is estimated that ten thousand foals will be born on the range each year, but only 2500 horses on average get adopted. There is current language in the act that prevents the BLM from sending excess horses to slaughter, or from selling the horses to those who would take them to slaughter. Congress is currently being pushed to remove these barriers and allow both the options for euthanizing and outright-selling excess horses.

I think it’s pretty obvious that my Mustang artwork was inspired by the 2002 film “Spirit: Stallion of the Cimarron” (a film that I’ve only seen once, actually, but I loved it!). “Spirit” is a real Kiger Mustang stallion who lives in the Return to Freedom’s American Wild Horse Sanctuary. He serves as a prominent ambassador of the Mustang breed. You can meet the real Spirit by clicking this link.

Information in this article has been taken from Wikipedia and the Bureau of Land Management website.

Share this article with your friends who love Mustang horses!