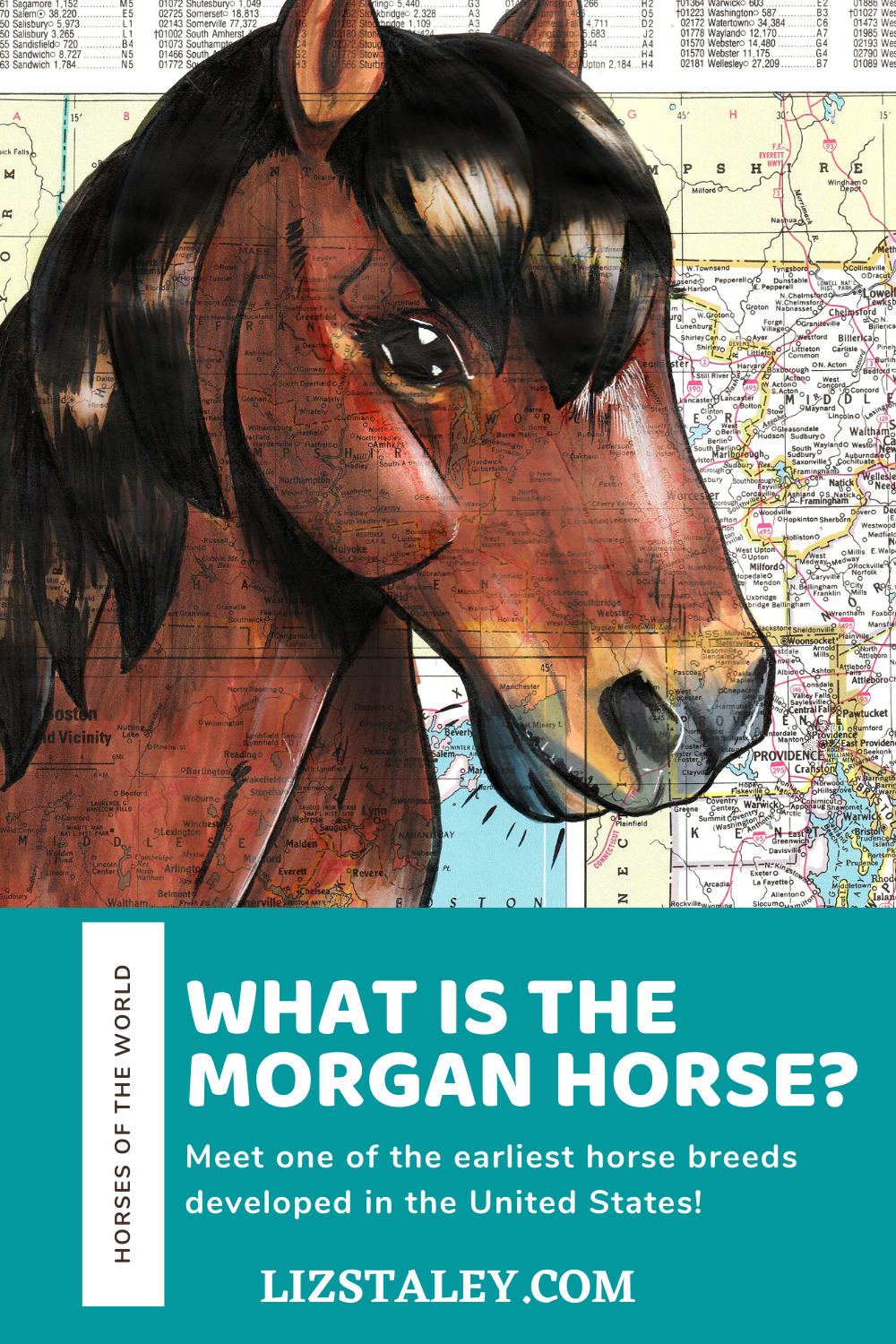 One of the earliest horse breeds developed in the united states, Morgans had many uses in 19th century American history. They were used as coach horses, in harness racing, for riding, and even as Cavalry horses during the American Civil War. Other American horse breeds that have been influenced by the Morgan include the American Quarter Horse, the Tennessee Walking Horse, and the Standardbred. The Morgan is a compact and refined horse, with strong legs, an expressive head with large eyes, and a well-arched neck. They have a reputation for being intelligent, courageous, and having a good disposition.

All Morgans trace back to one foundation sire, a stallion named Figure. Figure was born in West Springfield, Massachusetts, in 1789. In 1792, Figure was given to Justin Morgan as payment for a debt. Figure was known for passing on his looks, conformation, athleticism, and temperament to his offspring. Although he was used extensively as a breeding stallion, only six of his sons have written records.

By the 19th century, Morgans were a recognizable breed that was well-known for its diversity. They were the choice of many families who needed a horse to plow the fields, take the family to church and Sunday, and then take the Father to work on Monday. Morgans were heavily used in wagon trains moving west, as horses on cattle ranches, and by the US Army as cavalry mounts and harness horses.

In 1945, Marguerite Henry’s Justin Morgan Had A Horse was published. The book was a fictional account of Figure and his owner. Walt Disney Studios made a movie based on the book in 1972. Both the book and movie have been heavily criticized for not being accurate to the true history of Justin Morgan and his stallion.

The Morgan horse is very special to me, because that’s the breed of horse I own! My pretty girl, who you may have seen in other blog posts of mine if you’ve been visiting my blog for a while, is a Morgan mare. My Morgan piece for the Horses Of The World series is also the only breed in the series that I’ve drawn more than once. Back when I did the first Morgan design, I was drawing my sketches directly on the map and then going over the pencil lines with ink. Unfortunately, it was VERY hard to see pencil lines sometimes on the map backgrounds, so when I inked the first version of the Morgan I wasn’t happy with the outcome. At the time I didn’t have another map of the area, so I let it be. But once I got new atlases in, I decided to try again and I’m much happier with the “2019” version of the design (shown above!)

I have also used Morgans as models for the Civil War Cavalry horses on maps of Gettysburg that I did, as well.

I knew nothing about the Morgan breed until I met my now-best-friend and the horse who would become my first horse, but in the past 7 years I’ve come to appreciate and truly love this breed!