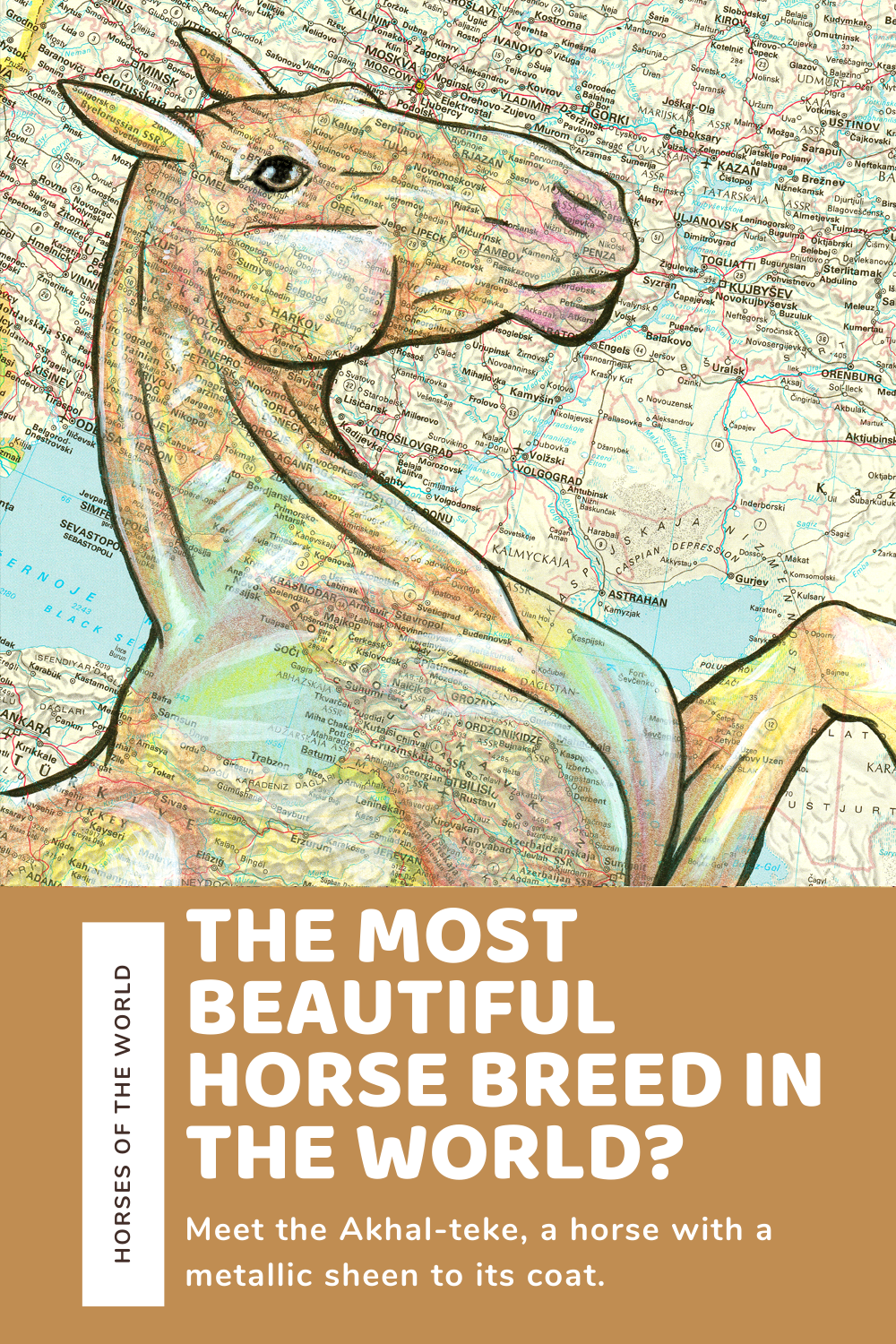 The Akhal-teke is thought to be one of the oldest existing horse breeds. They are from Turkmenistan, and have a reputation for speed, endurance, intelligence, and are known for the distinctive metallic sheen to their coat. This sheen to their coat has earned them the nickname “Golden Horses”. There are currently around 6,600 Akhal-tekes in the world, mostly in Russia.

The ancestors of the Akhal-teke breed may date back to animals living as much as 3,000 years ago. Their precise ancestry is difficult to trace because prior to around 1600 AD, horse breeds as we know them today did not exist. Instead, horses were identified by local strain or type. The Akhal-teke breed is possibly the direct descendant of the Turkoman horse, a breed that is believed to be extinct. The Turkoman horse breed may share a common ancestor with the Arabian horse.

Tribal peoples in what is Turkmenistan today used the Akhal-teke horses first for raiding. Horses were treasured possessions, crucial to income and survival. Horses were selectively bred, and their pedigrees were kept via an oral tradition. The horses were managed and trained in very specific ways, with stallions being kept tethered next to tents while mares and foals were allowed to seek forage. Stallions were covered head to tail in layers of felt – up to seven layers at a time – which kept their coat short and shiny. Before raids, the horses were put on a sparse diet to prepare them for the long ride through the desert. At this time, the horses were called “Argamaks” (Divine or Sacred) by the Russians. The Argamaks were highly prized for their speed, stamina, and loyalty.

In 1881, Turkmenistan became part of the Russian Empire. The tribes fought against this, but eventually lost. However, the Russian general Kuropatkin developed a love for the golden horses he’d seen while fighting the tribes. He founded a breeding farm and renamed the horses as “Akhal-teke” after the Teke Turkmen tribe that lived around the Akhal oasis.

The ancestral Akhal-teke has had an influence on many other horse breeds, including possibly the Thoroughbred. The Trakehner breed has also been influenced by the Akhal-teke, as well. The breed nearly died out when the Soviet Union required horses to be slaughtered for meat. At one point there were only 1,250 horses left, and their export from the Soviet Union was banned. In the early twentieth century, cross-breeding between the Thoroughbred and Akhal-teke was attempted in an effort to create a faster long-distance racehorse. These horses were not as resilient as their Akhal-teke ancestors, and many of the Anglo Akhal-tekes died because of the harsh conditions in Central Asia.

The Akhal-teke has a distinct sheen to its coat that makes it look like it is made of gold. Many people say that they are the most beautiful horses in the world thanks to this metallic sheen, as well as their refined and elegant build. The structure of the Akhal-teke’s fur is the cause of the shimmer thanks to it acting as a light intensifier. It is believed that the golden coat helps act as camouflage in the deserts of Turkmenistan.

Today, there are only 3,500 Akhal-teke horses in the world.

I am fascinated by the Akhal-teke breed. They are truly gorgeous and if you’ve never seen a photo or video of one, go to Google right now and look them up. They look like living metal statues and they are just GORGEOUS. When I started the Akhal-teke drawing for the Horses Of The World Series, I knew that capturing that golden sheen would be a challenge, especially when illustrating on a vintage map. This piece is one of my favorites in the series, though. I like it so much, in fact, that I had this piece printed on canvas to use as a large patch for the back of a jacket! I especially love how the golden horse drawing seems to almost blend with the colors of the map. Perhaps there is truth to that thought of the coat color being used for protection in the desert!