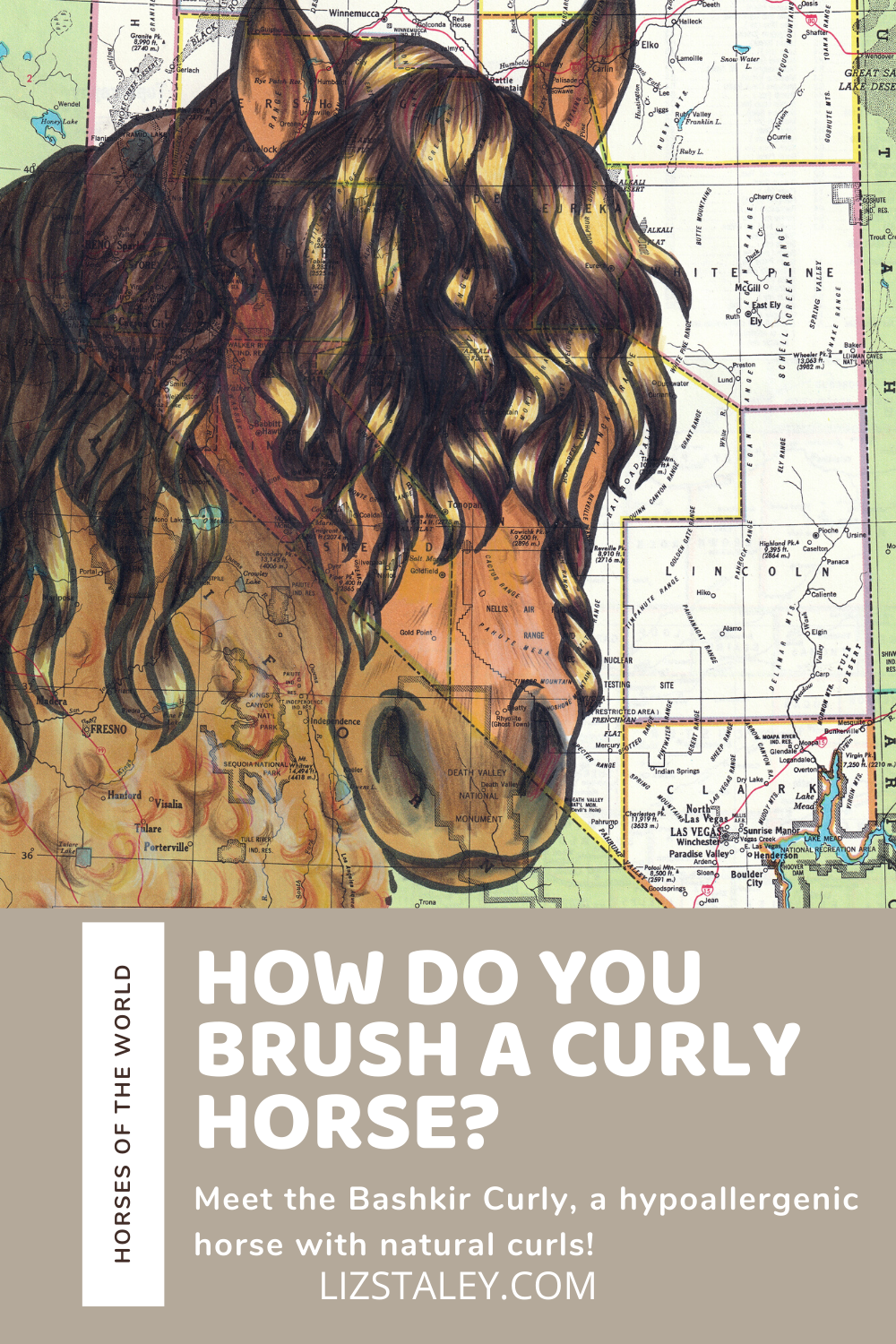 The Curly horse (also called the Bashkir Curly, North American Curly Horse, and American Bashkir Horse) comes in all colors, sizes, and body type – but is well known for its calm, intelligent, friendly personality, and their unique coat of curly hair.

The gene that gives the Curly horse its distinctive hair is most obvious in their winter coat. The gene can be expressed minimally, with curly hair just inside the ears, at fetlocks, and a wavy mane and tail. It can also be expressed maximally and in “extreme” ways. The maximal expression has curls all over the horse’s body, a “dreadlocked” mane, and curly eyelashes. The extreme expression shows tight curls all over the horse’s body, but this coat usually sheds out to almost bald in the summer. Summer coats on a curly horse show a slight wave.

The gene that gives the coat its curls is a heterozygous one, which means that some purebred Curlies show no curl at all. These are called “smooth coat” Curlies.

Caring for the curly hair is fairly simple. Most owners choose not to comb the mane to keep the coats from losing their curl. Manes are trimmed often to keep them from matting. Tails can be combed as normal. Many people collect the shedded hair from the mane and tails in Spring and donate it to the ICHO Fiber Guild to use the hair for spinning.

It is claimed that the Curly horse is the only hypoallergenic horse breed, as most people with horse allergies can handle them without an issues. A study was conducted that indicated a protein is missing from the hair of the Curly Horse that may be what causes allergic reactions, but the study was never published. Members of the Curly Horse community are trying to fund more research on this topic.

Research into the origin of the Curly horse is highly debated and is still being researched. Disagreements of the origin of the breed have resulted in confusion of what the breed is and what it should be called. Some organizations in the community want the word “Bashkir” removed from versions of the name because a 1990 study indicated that it is unlikely that the Bashkir horse – which also has a curly coat – is an ancestor. One theory is that the origins of the breed are Iberian.

The Curly horse was first recorded in Eureka, Nevada in the early 20th century by a rancher named John Damele and his sons. Mustangs were a common sight in the area, but horses with a curly coat of hair were not! Years later, the Dameles managed to catch one of the curly-coated horses, break it to ride, and sell it. In 1932 an unusually cold and harsh winter hit the area and by spring the only horses that could be found were the Curlies. This was evidence of the Curly horses’ hardiness, and the Damele family noted it and decided they should include more of these horses in their herd. After another harsh winter in 1951-1952, the family got serious about breeding the Curly horse. They found a foundation stallion in one of the Mustang herds – a two-year-old chestnut they named “Copper D”. The family didn’t care much about keeping the horses “pure” and added more blood to the herd, introducing a Morgan and an Arabian stallion among other breeds. Out of this one herd came the hundreds of pedigree Curly horses that are registered today.

Curlies are eye-catching and unusual in the show ring, and have the movement, endurance, and spirit for competition. They have been shown in the upper levels of some of the most elite equestrian events, including dressage and showjumping. Curlies are quiet, level-headed horses that don’t spook easily, making them excellent first horses for beginner riders. Riders with horse allergies have ridden Curlies from the beginning stages to the more advanced of competitions. The breed has also been used for driving, western events, ranch horses, trail horses, and companions. Curlies have been crossbred with some gaited breeds, resulting in about 10% of offspring that will do an ambling gait called the “Curly Shuffle”. The breed is not used for horse racing or high-trotting showing.

I am fascinated with the Curly horse! I think their curls make them absolutely adorable and unique, and felt that they deserved a place among the “Horses of the World” series. It was difficult to come up with a way to show the fur texture on the chest of my drawing, but I’m very happy with the outcome of the mane! The Curly was drawn with ink and colored pencil on a map page.

Have you ever seen a Curly horse? Do you know someone who loves the Curly breed? Use the buttons below to share this post with them!