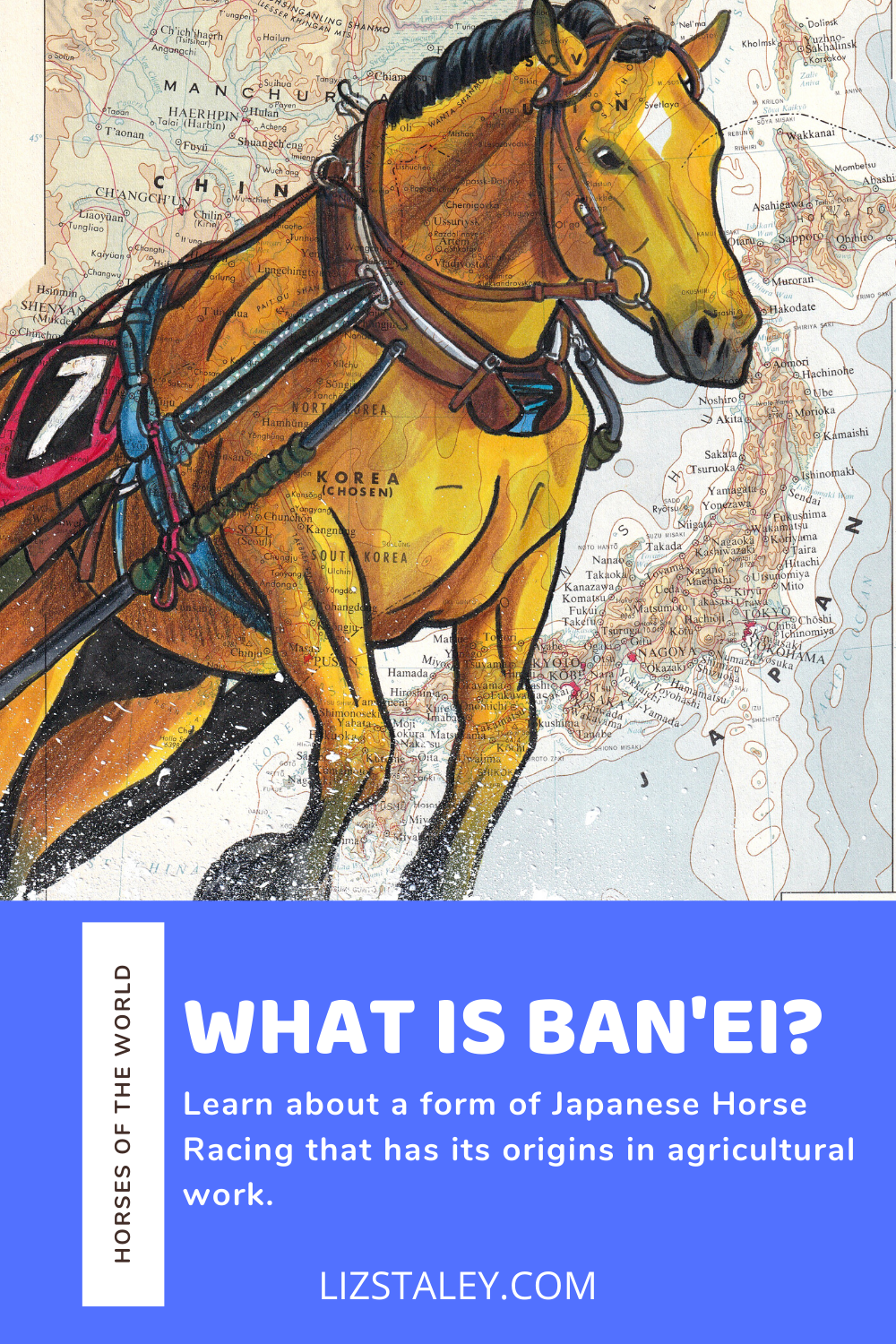 Banei Kyoso (literally “pull race”) is a Japanese horse race that has its probable origin in agricultural work. Draft horses are used to pull heavy sleds up sand ramps, in the way that horses were used to pull farming machinery and sleds of wood, while jockeys balance on the sleds. Eventually, the strength and speed of these horses were tested in festivals in the late Meiji Era.

The popularity of the races grew, and by 1953 Hokkaido’s four cities of Kitami, Asahikawa, Iwamizawa, and Obihiro began to manage races. The former three closed up racing operations in 2007 because of declining revenues. Obihiro is now the only active racecourse and hosts races most Saturdays, Sundays, and Mondays. The Obihiro racecourse nearly closed in 2006 before Softbank, a Japanese mobile phone company, bailed them out and provided funds to continue races. Rakuten, Sapporo Breweries, and other companies have also added their sponsorship and several other programs have been started, including a race-sponsoring initiative for individuals. In addition to the regular weekend races, special occasions are also marked with ban’ei. There are many regional races too, known as ban’ei koshien.

A ban’ei course is 200 meters (660 feet) of dirt track with rope-separated lanes in the sand. There are ten lanes in a track, each with a starting gate and two hill-shaped obstacles. The second obstacle is a steeper hill called the Ban’ei Point. Horses pull heavy sleds, weighing from 450 kilograms (990 pounds) to 1 ton, down the track while jockeys stand on the sleds and steer the horse with a set of long reins. The amount of weight a horse must pull is determined by several factors. Young horses and mares pull less weight than older horses and stallions. The horse’s group and rating, determined by previous winnings, further determines the weight of the sled.

Ban’ei racing is about strength, not speed. Because of this, the horses used in Ban’ei are often purebred on crossbred Belgian, Breton, or Percheron draft horses. There is also a Japanese draft horse, which was created by crossing purebred and half-bred horses together for five consecutive generations. Ardennes, Clydesdale, Shire, Brabancon, Breton, Boulonnais, Belgian, and Percheron horses have been cleared for this breeding program. Japanese draft horses that aren’t used in ban’ei racing are usually used in horse meat production.

I first learned about Ban’ei racing from an anime called Silver Spoon that I watched on Netflix a few years ago. I found the slow horse races that emphasized strength instead of speed to be pretty fascinating! When I started doing research for adding a ban’ei horse to the Horses Of The World, I was uncertain about it at first. Because all of the horses up to this point had been a specific breed, and ban’ei racing isn’t limited to one breed of horse, I wondered if it “fit” into the series. However, I ultimately decided to include the Ban’ei horse because I believe it’s a unique event that is on the verge of extinction, so I wanted to be able to spread awareness of it in even some small way.

Did you know about Ban’ei racing before? If not, share this post with your horse-loving friends using the buttons below!